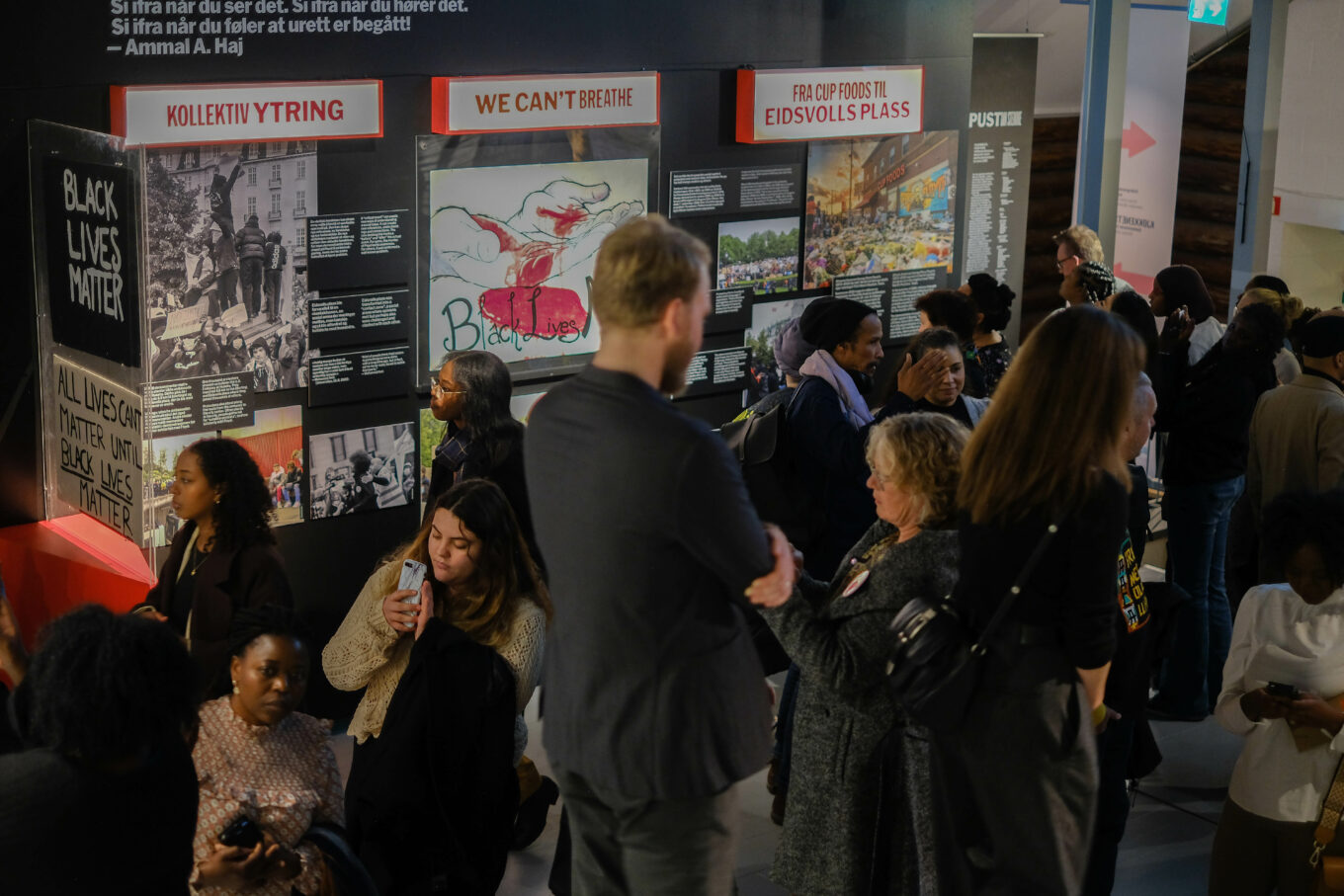 OSLO – On the 18th October, the Oslo City Museum in Frogner Park opened its doors to welcome visitors eager to look back and remember that historic day of 5th June 2020, when more than 15,000 people in Oslo gathered in front of Norway’s Parliament to participate in the demonstration “We can’t breathe – Justice for George Floyd”, following his murder due to racial discrimination and police brutality in Minnesota, USA.

Ten days after George Floyd was murdered by the police in the USA, while Oslo was still struggling with implementing COVID restrictions, a crowd of 15,000 marched from the US embassy to Eidsvoll Square in front of Norway’s Parliament to show solidarity and support against police brutality and racism in the USA and demand justice for George Floyd, making it one of the largest demonstrations in Norway. On that rainy day in 2020, just when the COVID restrictions were just slightly, but not fully lifted, these Oslo-based organizations, Africans Rising in Solidarity and Empowerment (ARISE) and African Student Association UiO (ASA) originally planned to only have 50 people but received overwhelming support from residents in Oslo and smaller demonstrations in Trondheim, Bergen, Kristiansand, Stord, and Skien.

Social anthropologist Michelle A. Tisdel, who participated in the demonstration, woke up the next day and thought, “We must take care of the posters!” She was then inspired to initiate Lift Every Voice (LEV), a documentation project to collect some protest posters used in the demonstration. Just after two days, many people from the demonstration contacted her saying they “were willing to donate the posters” including ARISE, ASA, and The Oslo Desk who helped spread the word about the project. She started collecting them in the summer of 2020 and all the posters, photos, and videos have since been shown at Kunsthall Trondheim, HUMSAM Library at the University of Oslo (UiO), and Tøyen Library. She said that the “exhibition at Bymuseet is the largest and most elaborate exhibition.”

The exhibit, “Your Breath, Your Voice” (Din Pust, Din Stemme), inspired by the final words of George Floyd, “I can’t breathe” which he uttered 20 times before his death. A small stage was placed in the corner of the welcome area with several chairs and tables for the expected guests. Drinks were served on a long table on the right side, beside the door that leads to the exhibit area. As the guests start to pour in, DJ Brighteyes played soul music from Al Green, Anita Baker, Nina Simone, Stevie Wonder, and more from known Black artists. When asked about the inspiration for the playlist, she said “Music has always been a part of movements. I would like for the music tonight to take us back on the thoughts and emotions of that day and feel hope.”

Visitors quickly filled the museum’s capacity and the chairs were not enough for all who came to the opening. One had to squeeze their way through to get from one corner to the other. The scene was similar to a class reunion: everyone seemed to know someone; hugging and introducing friends or family to one another. People had smiles on their faces and some parents brought their young children as well.

The museum’s new director, Marie Skoie opened the program by thanking the organizers and visitors, and cited the museum’s important role in presenting Oslo’s history; its relevance, and its importance. She acknowledged the efforts of the LEV project to make the exhibit possible and emphasized that “The demonstration was an important part of Oslo’s history and stirred a new dialogue on racism in Norway.”

Representatives from ARISE and ASA UiO spoke about the motivation behind organizing the demonstration, its necessity, and its significance on anti-racism in Norway – then and today. George Floyd’s death in 2020 sparked an uprising of protests and movements around the world, particularly in Oslo, where racism is an uncomfortable topic. The Norwegian police called to avoid any mass gatherings in June 2020, but even the organizers did not expect the number of people who showed up for the demonstration. However, “It quickly became quiet after the demonstration.”, explained Rossette Chidindi from ARISE. She expressed that although the crowd was large and many from different organizations expressed support to work with them, “once it wasn’t trendy anymore, only a few remained willing and interested in actually doing the work.” She appealed to never forget the names of Benjamin Hermansen, Eugene Obiora, and Johanne Ihle-Hansen whose lives were taken by racism in Norway. She called for not just further dialogue, but a concrete plan to end racism in the communities in Norway.

The student leaders of ASA expressed having mixed emotions in seeing the exhibition. “The exhibition shows pain; pain that the demonstration was necessary, and pain that this exhibition is necessary. More than that, however, it also shows hope; that so many turned up for the demonstration two years ago and also here today for the exhibition.”, said Debby K. Wanja, current president of ASA. Mohamed Awil who was the President of ASA in 2020 added “Unfortunately, we still have the same problems with racism even after two years. We learned a lot from the demonstration and continue to have discussions to have solutions. To those who came here today, I thank you all.”

Tracee Meyn and Siv Iren Misund sang “Lift Every Voice and Sing” also known as the “Black National Anthem” in the USA while Hanna Wozene Kvam recited a poem. Odin Adelsten Aunan Bohmann from the Ministry of Culture and Equality and Cliff Moustache of the Nordic Black Theatre gave closing remarks with strong appeals to not just join but share in the efforts to create a safe space for all in Norway.

The exhibit shows around 50 posters and pictures of posters used during the demonstration. Photographs of those who participated and video documentation were donated by The Oslo Desk and oral history interviews were collected in collaboration with Memoar. The exhibit in Bymuseet was organized with help from TrAP, and the exhibition and posters were designed by João Doria. Michelle explained, “We wanted to show the unfiltered stories, experiences, observations, thoughts, and feelings that motivated all those participants during the demonstration. The exhibition is intended as a conversation with those who were present that day. It is also intended as a conversation between the present and the past about the history of anti-racism in Norway.”

Due to the number of visitors that came, they were reminded to take caution upon entering the exhibit. The doors that led to the exhibit were opened and upon entering, there is a sense of anticipation as the lights were slightly dim inside, a soft rumble of voices talking echoed around the room, and there is a short set of stairs before the eyes are immediately directed to the center of the room. On top of the stair-like stage was a huge colorful mural of George Floyd donated by Astrid Solgaard to LEV. The words “Black Lives Matter” are written over the mural as well as all over the room. On one side of the room were some posters calling for Erna Solberg, the Prime Minister in 2020, to react and say something on the matter. One poster said, “Racism is a pandemic too” as, during that time, everyone seemed to only be focused on the COVID-19 pandemic, and turning a blind eye to other equally important issues in the communities.

Video interviews and coverage during and after the event were played on the screens. Some visitors were happily surprised to see their faces in the photos on the walls and on the stage’s stairs. People were taking photos of themselves and would describe how the context of the photos to their companions. Each photo or poster had descriptions in Norwegian and English. In the photos, the participants of the demonstration were seen to have frustration on their faces, holding umbrellas or some already soaked in rain. There were videos of participants echoing the call of those speaking on the microphone in front of the Parliament. Some posters seemed like it was made to be sturdy, but some seemed to be hastily written on whatever material was available. If the posters have not been carefully preserved, they would’ve easily been erased or destroyed.

Siv Iren Misund said that seeing the posters brought back strong emotions and a sense of discomfort. But “it is important to have these conversations no matter how uncomfortable they may be. We can continue to have the same safe conversations (on racism), but until we go out of our comfort zone and confront the realities that people face, we cannot put it to an end.”

The exhibit remains open in The Oslo City Museum until October 2023 with free entrance on Saturdays.

Dana, born and raised in the Philippines moved to Norway in July 2020. She holds a Bachelor’s degree in Nursing and a Master’s Degree in Education. She grew up reading books with her grandfather who worked as an Editor for 35 years and was trained to write by her father who was a teacher. She worked in the field of medical research and publication for 10 years and continues to work remotely from Oslo. She is currently learning the Norwegian language and hopes to fulfill her dreams to write more about relevant and significant themes.