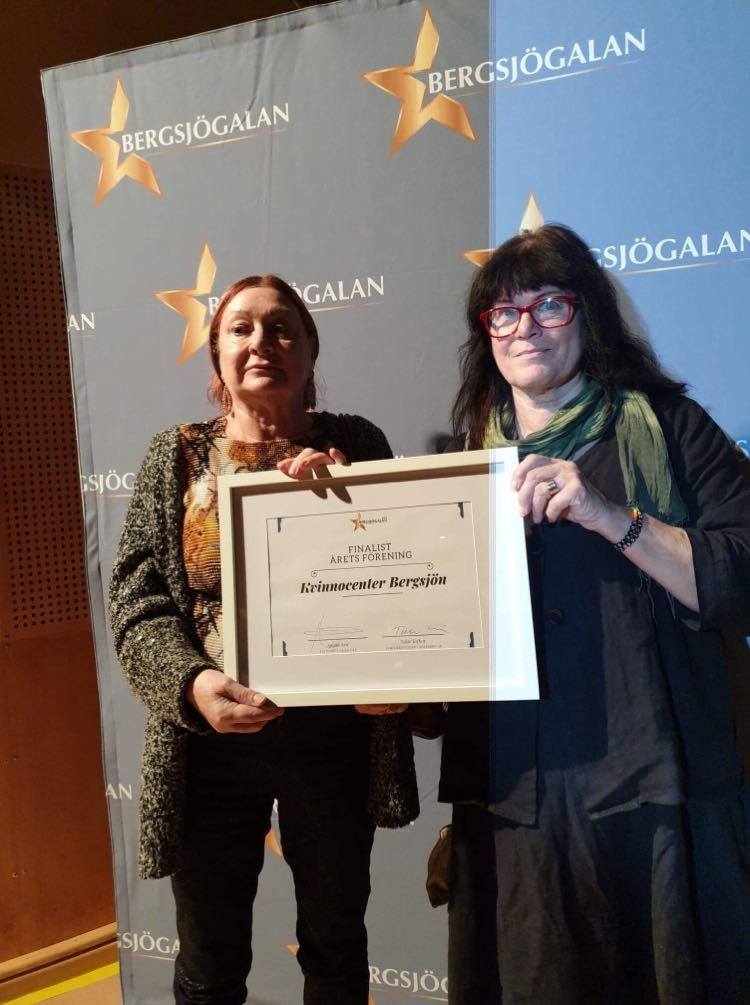 Ann-Britt Svensson and Marianne Lööf at the European Network for Intercultural Elderly Care as their organisation, Kvinnocenter won the Association of the Year 2019. Photo: ENIEC

Swedish language teacher Ann-Britt Svensson lived for many years in Bergsjön, one of the poorest suburbs in Gothenburg, where she would often encounter many immigrant women mostly from Somalia in the suburb’s predominantly immigrant neighborhood.

The suburb is also the location of the Kvinnocenter, a center for immigrant women that was started in 1998. They have provided language skills and human rights training to women from all over the world.

The center considers human rights training for women as necessary because they need to know their rights in the new society that they now belong to; and make them understand that knowing the difference between their new country and their home country will enable them to navigate the Swedish system better. This will in turn empower themselves by taking an active part in the society.

“The (Somali immigrant women) were coming to us (at the Kvinnocenter) and we were the first one who reached the Somalia women,” recalled Svensson, who is also the center’s president.

She also said that most of the women that came to the center had never left home before they sought out the center to learn about the Swedish language and society, and their human rights. Aside from language instruction, the women are also welcome to join the different activities in the center.

In the language classes, Svensson noticed that the immigrant women who take part in classes have varying levels of education, from the analphabetic to those with academic background. A situation that necessitates adjustments in language instructions to accommodate those who may have to start from the lowest level of learning the alphabet or learning to read and write.

Women learning the language at the center get help by starting to learn the alphabet; and for those who need it, get assistance from a translator in class. The meeting place at the center has also become not just a venue for holding classes but also a platform for women to help each other, exchange information and practice speaking Swedish among themselves until they can slowly gain mastery of the language.

Svensson said that she saw the importance of teaching human rights to women because knowing their rights “get them respect from their children.” She says that when women know their rights they “know how to act in society”, such as being able to participate in school, go to parents’ meetings, go to the doctor without having to let their children act as translators. They also need to know that they have a right to learn the Swedish language.

Ann-Britt Svensson told The Oslo Desk that the embroidery in the photo was first made by the embroidery group. It’s a self-portrait where women talk about themselves, and the war they fled from in Bosnia and Somalia. The women in the group learned Swedish at the same time as they were making these embroideries.

Such is the case of a woman from Kurdistan in Iraq who came to the center with nothing after losing her husband and not knowing what to do with her life.  She could not speak Swedish well and cannot even read and write. In the first two weeks of coming to the center, she just cried and only started talking to the other women after a while and told them of her story of becoming a wife at 12 years old. Then becoming a mother at 13 in her home country in Kurdistan before moving to Sweden with her family.

All her sad experiences are behind her now as she has started to work at the center and is in charge of catering at the kitchen. Now gainfully employed, she said that she even has to show her children the money that she has earned so they will believe that she has indeed started getting paid for work. Her children were very happy for her and she felt proud of what she had accomplished after getting help from the center.

Ten women from different countries work at the center as guides to newly arrived immigrants, who are mostly refugees. These women provide the new arrivals with information on everything they need to know about Swedish society and systems, including, the school system.

“I think it is very important, they work together at the women center. Learn together, work together, support each other and get new friends. It is a nice place to be for them and for us. (because) we learn together,” pointed out social worker Marianne Lööf who also works at the center.

The center has also helped 80 other women to get into various kinds of jobs with some of them working as “cultural translators.”

Despite the good results from working with inclusion of immigrant women, Kvinnocenter struggles to find funding for their activities like most non-government organizations.

“It is not easy. It is a lot of work to find the money and we together have to work a lot with this and now,” Loof revealed.

She was also disappointed over the cancellation of the three-day conference between 11th and 13th in March in Oslo due to the coronavirus pandemic and lockdown measures but she and Svensson decided to stay and work on seeking funding possibilities for the organization.

Kvinno Center was supposed to attend the three-day conference to learn about the different initiatives for an inclusive society, as part of an exchanging knowledge and practices under the project, Family+ which is partly funded by Eramus Plus program of the European Union.

Instead, they were interviewed by The Oslo Desk in a podcast season on different inclusive practices for migrants in collaboration with the adult learning center, Oslo VO Rosenhof.  The podcast can be listened to here.

She also added that it is harder to get funding for NGOs in Sweden these days as they are getting less respect than their community-led counterparts.

Lööf initially got involved with the center when she was tapped from her community work to assist the center in seeking funds for its operations. When the funding was granted, she joined the center as a member as she thought it is a very good organization for women. A couple of years later, she started working for the center as a social worker, who the women can turn to on questions about social contacts and authorities; and helps find funding for the center.

Despite funding issues, both women are proud of the center’s results in empowering immigrant women and easing them into the new roles as active citizens in Sweden.

By inviting the immigrant women to participate in the activities in the center, such as discussion on political parties during elections and holding meetings to watch the result of the elections, the center hopes it will give them a better understanding of the political aspects of Sweden.

The center also welcomes individuals or organization who may have negative ideas about migration and refugees so that they can be informed of the integration initiatives that they are doing for immigrant women.

After more than two decades of working with integration of immigrant women, the Kvinnocenter has since been recognized as a local center of excellence for equality and diversity.  It has also been successful in establishing collaborative links with other organizations and agencies, and in promoting exchanges internationally as part of Erasmus integration network in Europe.