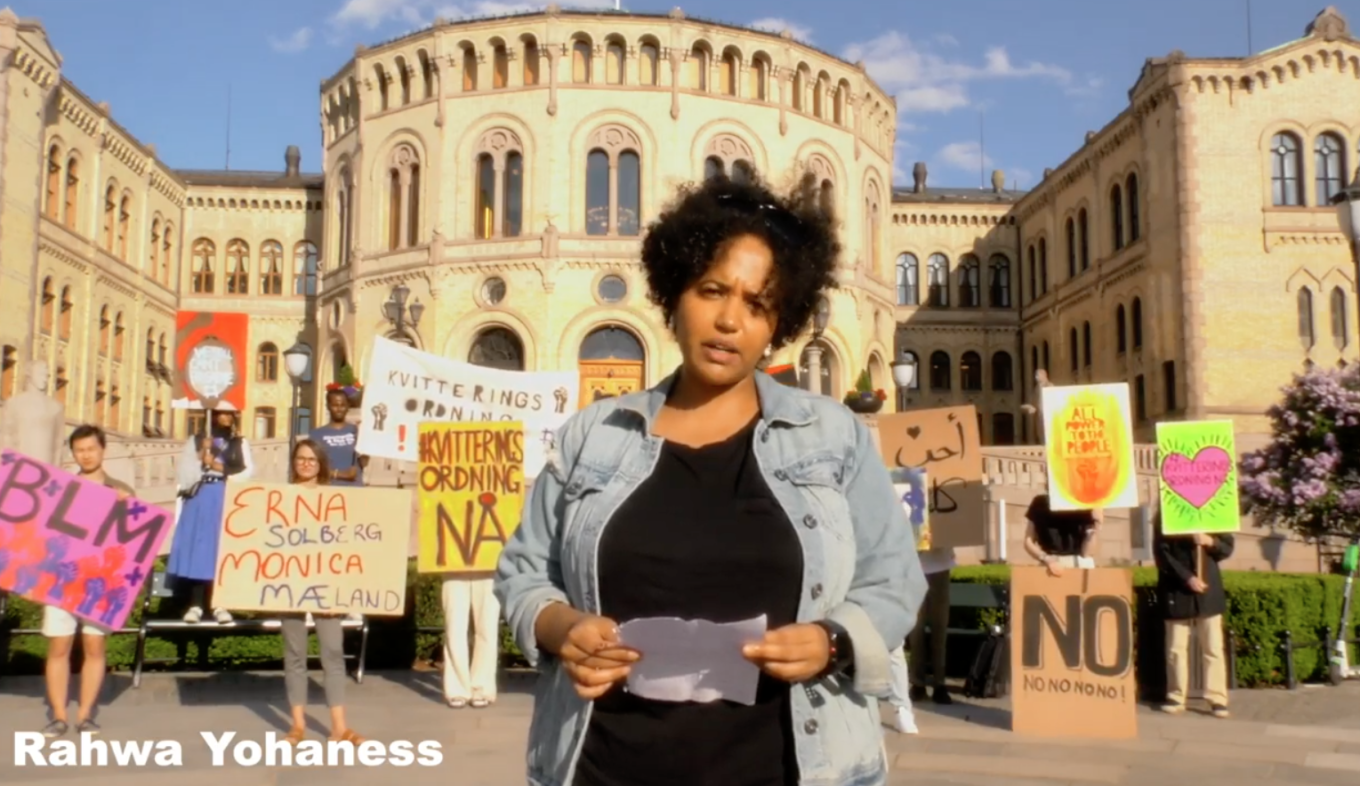 One year on, organisers ARISE and Oslo University’s African Student Association still have not heard back from Norwegian Ministry of Justice and Public Affairs on their 28 000 signed petition to end racial profiling by the police and demands the abolition of Norway’s structural racism.

OSLO – After the brutal murder of George Floyd on 25th May 2020 last year, organisers Oslo African rights organization ARISE and Oslo University’s African Student Association planned a demonstration, “We Can’t Breathe – Justice for George Floyd” on 5th June 2020 at several locations. More than 15 000 people turned up at the demonstration despite the ongoing coronavirus pandemic.

Today marks the first-year anniversary of that demonstration and the organisers planned a digital demonstration, “We Still Can’t Breathe” to commemorate the day of standing in solidarity with the US movement and to remind Norwegian authorities that they demand answers to the “Kvitteringsordning” projects to end racial profiling by the police.

Last year 15th June, the organisers handed over a petition with 16 000 signatures to the Ministry of Justice and Public Security in the presence of The Oslo Desk staff. The petition calls for an end to racial profiling in the police and urging for a reporting system for police checks on the population. Now, the petition 28 000 signatures.

The implementation of the “Kvitteringsordning” has already been passed by the Norwegian parliament in 2003 which was brought to their attention by OMOD (Organisasjonen Mot Offentlig Diskriminering/Organisation Against Public Discrimination) in 1993. During that time, OMOD had gathered 5000 signatures from individuals who had been subjected to discrimination by the police and border control personnel.

“A year has passed, and we have not received an answer from the justice minister, it is disappointing to see that our call for justice is wilfully and consciously ignored by the authorities. We have not seen any actions or measures by the government led by Prime Minister Erna Solberg to end ethnic/racial profiling or police brutality in Norway,” says organisers on their Facebook event.

“The police are not required to log/ document its control activities and ethnic minorities are continuously are exposed to harassment and intimidation in public spaces without any form for documentation. The police continue to carry out “Stop and control/search” and raid people’s homes and intervene in peoples’ lives unchecked. The lack of internal control or comprehensive statistics leaves us unable to follow up on complaints or suspicions of ethnic profiling,” continues the organisers.

The digital demonstration, “We Still Can’t Breathe”, also calls for police accountability and the abolition of structural racism in Norway. The organisers have also listed ways in which participants can take part:

1. Check in at the Norwegian Prime Minister’s Office (Statsministerens Kontor (Norge))
2. Tag Erna Solberg (@erna_solberg) and
3. Use the following hashtags: