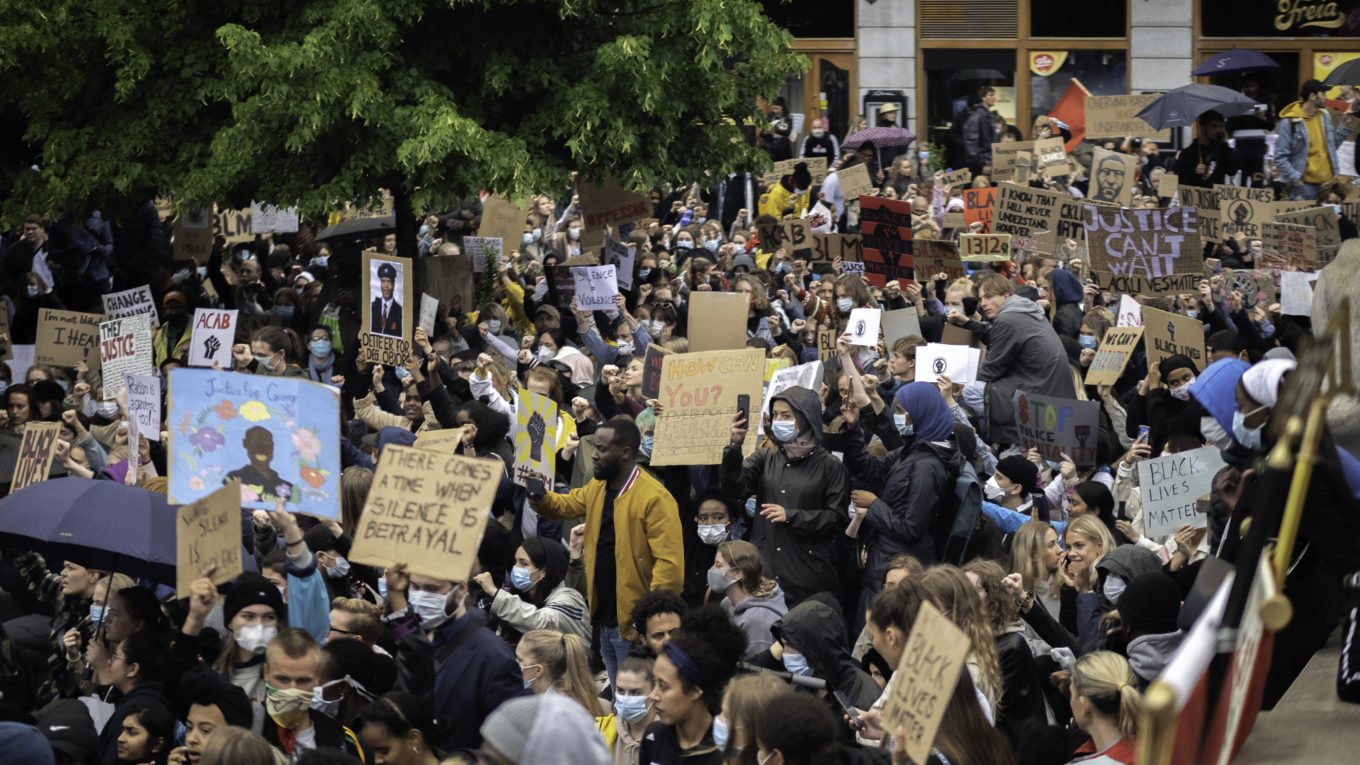 The plan called for a human chain of 750 people, standing 1 meter apart, to respect coronavirus infection control rules. Also, a small gathering of 50 people was to be outside the US Embassy.

Instead, as many as 15,000 converged in front of the Norwegian Parliament (Stortinget) and several hundred were outside the US Embassy.

The thousands came out to participate in the “We Can’t Breathe – Justice for George Floyd” event. Chants of “I can’t breathe”, “Say his name: George Floyd” and “No justice, no peace” filled Eidsvold Plass as demonstrators held signs that carried those messages and more.

“It was so powerful, so amazing, so touching” said Iselin Shumba, an actress and activist who also spoke at the demonstration that was organized by the Oslo African rights organization ARISE and Oslo University’s African Student Association.

The organizers were concerned about the massive crowd considering the coronavirus situation, and they handed out free face masks with dollops of hand sanitizer.

Hundreds of protests against racism have taken place around the world, galvanized by the videotaped death of George Floyd, an African American who was killed in Minneapolis when a white police officer held his knee on his neck for 8 minutes and 46 seconds.

In Oslo, on Friday the crowd’s thunderous chanting was quelled during an 8-minute-and-46 second span, where numerous kneeled and one of the organizers recited Floyd’s final words.

Muffled sobs could be heard from the crowd. Tears streamed down cheeks and young men bowed their heads.

“You will never get used to knowing that people are dying,” Shumba said of the victims of racial violence. “You get tired, but this really feels like momentum.”

Many said they felt the demonstration was a spark of making a real change. It has helped open the dialogue between people, and amplify the voices of those who have long pointed out Norway’s racial disparities.

Organizer Rahwa Yohaness said the push to end racism must be more than one demonstration.

“We need to have a dialogue and find concrete solutions and implement them,” Yohaness said. “A demonstration is not enough, we need to be engaged all the time, we need to keep talking, we need to keep demanding to be heard until we finally are.”

Melanie Coffee is a storyteller with more than 20 years of journalistic experience. She mostly enjoys stories that connect people, and opens their minds to a slice of life that they might not have previously known. She is an award-winning journalist, blogger and social media strategist who comes from America’s Midwest, but now lives just outside Oslo.