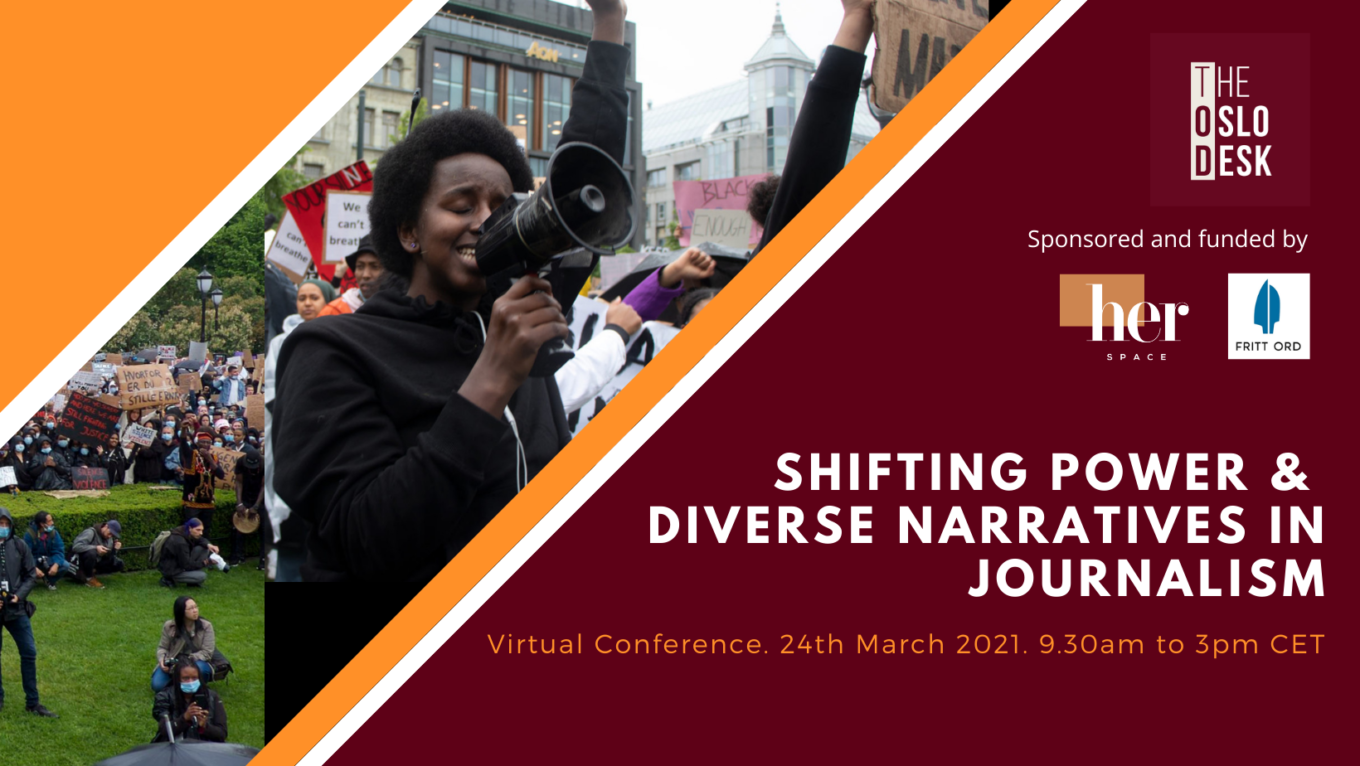 After the demonstration, ‘We can’t Breathe. Justice for George Floyd’, attended by more than 15 000 protesters on 5th June 2020 in Oslo, racism has become “trendy” in Norwegian media. But who has the power to talk about racism? What role does journalism play in a diverse society? How do we tell more diverse and inclusive stories?

In this virtual conference, we will address these issues and present an opportunity for journalists with minority backgrounds to tackle issues of diversity and inclusion in the media and journalism industry.

The program will be divided into two themes. 1)Diversity, Equity and Inclusion in Norwegian Newsroom and 2) Language, Narrative and Power in Mass Media.

The conference is sponsored by HerSpace and FrittOrd.

Melanie Coffee Hesselberg is an award-winning journalist with 20 years of editorial and journalistic planning, content development and management experience across both traditional and digital media platforms – including 12+ years with the world’s largest news organization. Her work has appeared in The Huffington Post, Crain’s Chicago Business, the Chicago Reporter, Rebellious Magazine for Women and many more. She worked with The Associated Press for more than 12 years in Chicago, Kansas City and St.Louis. When she was an AP reporter, she covered those who died in the Sept. 11, 2001 terror attacks, numerous high-profile court cases, national political scandals and a few mass shootings. As an editor, she helped manage 14 states’ in-depth news stories across all media platforms and developed numerous short- and long term projects. She was also the web editor of an investigative journalism magazine in Chicago. Her love of language has given her excellent editing skills and a keen eye for identifying trends and compelling stories for a national audience. She has also conducted diversity workshops for 15 years.

Jon Martin Larsen (1975) is a college lecturer at Kristiania University College and teaches journalism, politics, communication and social studies. Larsen has been associated with Kristiania University College and the forerunners for over twenty years and taught at the schools in Oslo, Bergen and Trondheim in addition to other full-time jobs such as journalist and editor in Norwegian newsrooms and head of communications in international organizations. He has a Master’s degree in International Journalism from Cardiff University and wrote a master’s thesis on how terror, migration and minorities influence the Turkish identity and the Turkish state. He is also currently a critic columnist for the media news site, Medier24, where he specializes in topics surrounding diversity and media.

Dr. G. Anthony Giannoumis is a social entrepreneur, advocate, and researcher in Oslo, Norway. He is an internationally recognized expert in universal design of 4 information and communication technology (ICT) and conducts state-of-the-art research on implementing universal designprinciples in practice. Anthony leads and participates in severallarge-scale research and innovation projects based in over 17countries. Anthony is an Associate Professor of Universal Design of ICT atthe Department of Computer Science at Oslo Metropolitan University (OsloMet). He works with the United Nations (UN) International Telecommunications Union (ITU) as the Vice Rapporteur for the subcommittee on ICT Accessibility and Access Coalition Liaison for EQUALS. He is founder and Chair of the Board for the Global Universal Design Commission Europe AS and MyGoverNext Oslo. He is a member of the board for the Global Universal Design Commission and the Gender Equality in Technology student organization. He has been a member of the Association for Computing Machinery’s (ACM) Task Force on Diversity and Inclusion and was awarded a Marie Curie Fellowship as part of the DREAM research network. Since 2014, Anthony has acted as a principal investigator for research and innovation projects, and has received awards from the UN, OsloMet, Cambridge University, and other foundationsand associations. He regularly teaches courses and lectures around the world, appears frequently on national and international media, and maintains a strong presence on several social media platforms.

Xueqi Pang (25) is a Chinese-Norwegian journalist and photographer, employed by Norway’s biggest newspaper Verdens Gang (VG). With a bachelor’s degree in journalism from the Norwegian University College of Oslo And Akershus. She is currently one of the few reporters in Norway who reports using Snapchat to reach a younger target audience. Pang has covered a wide range of topics for various influential Norwegian news outlets since 2015. Her best work reflects everything from life changing reporting on social injustice,OnlyFans to Billie Eilish. She has also written several personal opinion pieces that have uncloaked the struggle of young Asian immigrants in Scandinavia, and challenged the majority on social issues such as yellow fever, whitewashing and lack of representation in the media. In her spare time Pang is one of the two initiators behind the network «East-Asians in the media industry» for Asians in Norway.

Rahwa Yohanness is a public speaker, activist and the founder of Manifold, an organization promoting diversity and positive changes in society with focus on empowering Black and minority women and youth in Norway. Rahwa is the partnerships and events coordinator of African Innovation Week and has been involved in movements such as Hack Africa Against the Covid-19 crisis and hosts a series of talks raising awareness about intersectional identities. She has also been one of the front-runners of the “Decolonizing Academia” debate in Norway on a grassroots level, always providing a critical but generous voice in the room. At the University of Oslo, Rahwa is political advisor of the African Student Association (ASA), where she previously served as president. Rahwa was also one of the main organizers behind the “We Can’t Breathe” Black Lives Matter demonstration in Olso in June 2020. In her work, Rahwa collaborates closely with grassroot organisations, academics, artists, and activists in the diaspora to organize and facilitate a variety of events, including panel discussions, educational and artistic workshops as well as community gatherings.

Social anthropologist Michelle A. Tisdel holds a doctorate from Harvard University and has worked nearly 15 years in the heritage sector in Norway. Tisdel’s research interests include heritage production and institutions, as well as belonging, participatory processes, and autobiographical and community narratives. Collecting source material and promoting the history and narratives of “Multicultural” and minority communities requires adequate competence, resources and priorities. Sector-wide challenges and priorities can result in community perspectives and stories becoming objects of diversity initiatives and strategies.

Eliot Moleba is a South African Oslo-based scholar, writer, editor, theatre-maker and director. He is one of the founding members of PlayRiot, a collective of playwrights committed to telling bold, contemporary South African stories. He holds an honours degree in Dramatic Arts from the University of the Witwatersrand, where he also completed his MA in Critical Diversity Studies, which looked at narrative research: interrogating youth identity constructions in South Africa. Moleba is the former resident dramaturg at The South African State Theatre. He is currently pursuing a PhD in Theatre Directing at The Oslo National Academy of the Arts. Moleba examines narratives of Norwegians with ‘immigration and/or multicultural’ backgrounds in public spaces.

Andy Leve holds an Honours Degree in Journalism and Media Studies, specialising in Television and Documentary Making; with Political and International Studies as her other major. The award-winning Andy works in radio, print, television, and in the online space. Her portfolio includes bylines and production for networks and publications in Norway, Germany, France, Abu Dhabi, and South Africa. Awards include: Liberty Radio Awards for Best Breakfast Show Team Winner ( 3 years consecutively); Nominee: Best Music Show: The Sound of SA (2018); and Promax Global Award Winner: Africa: Silver Award for Best Brand Campaign (2020). The beats/ subject matter that Andy covers vary from human interest, socio-political, and travel. Andy will be speaking on the importance of nuance as a storyteller. The danger of a single story robs those who are being written about a holistic lived experience. Western media often,and a particular Norwegian publication I work for, tend to want to push the “dangers, the violence, the drama, the poverty” of the Black AFRICAN experience. This perpetuates stereotypes, it creates a white saviour complex and superiority complex and tells a homogenous and linear lived experience. Africa is not a country. Its people are as vast and multi-dimensional as any other, thus we need to be mindful of that danger of a single story, to quote Chimamanda Ngozie Adichie.

Ka Man Mak is a human-centred investigative journalist, documentary photographer, podcast anchor and social entrepreneur. She is also the founder of The Oslo Desk, a journalism house that publishes stories that matters to immigrants. As a British-born Hong Konger living in Europe, Ka Man is no stranger to the issues immigrants face and their struggles to get their voices heard. Her desire to create a safe space, a community, and a platform for the unheard makes up The Oslo Desk’s core values. She holds a Master in Environmental Geoscience and has taken numerous diplomas including child psychology, and a course in big data analytics at OsloMet. She is a self-made journalist and has covered stories of women in migration, refugees and immigrants over the past 6 years in Norway, and understands the system that can play out against them. She has accompanied women to police stations and witnessed the heavy process that women go through when they experience domestic violence or stalking of their ex-partners. She has followed undocumented migrants, and sat side-by-side with them as they struggled to get through the day. She spent a year investigating the discrimination that foreign mothers face with public institutions when dealing with their child custody in divorce cases. She is a multipotentialite with interdisciplinary skills that focuses on the power of social impact storytelling, systems journalism, and inclusive narrative. Her work has published in magazines and newspapers; and was interviewed by Radio Latin Amerika and Nordic Chinese Communication Magazine on The Oslo Desk. The Oslo Desk was nominated at Nordic Media Festival 2018, where she was the only Asian female entrepreneur among the other candidates. She spends part of her time freelancing for impact-driven Norwegian companies leading and executing media strategies from brand communication to content marketing.