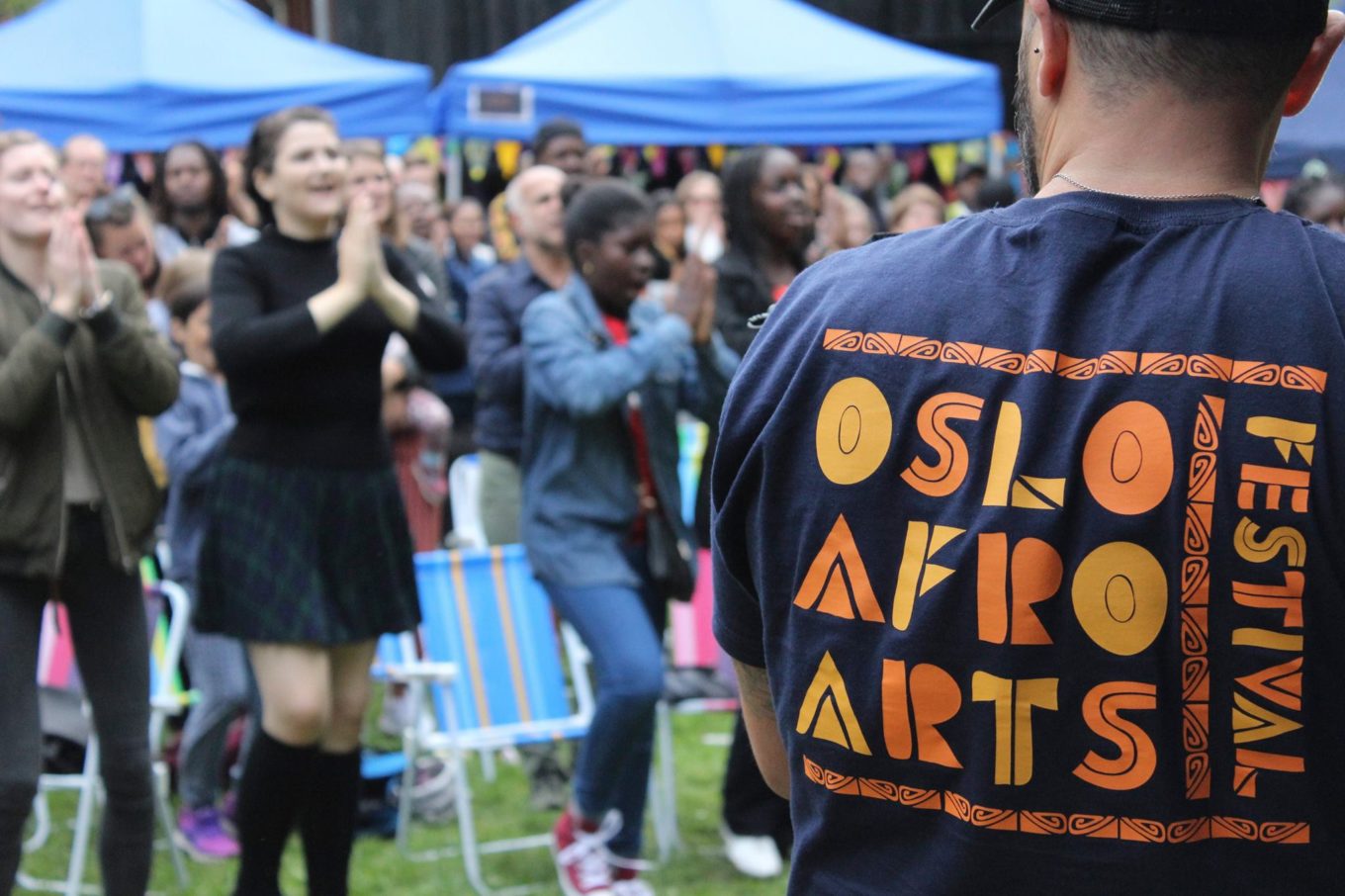 OSLO (August 9, 2021) – The 7th edition of the Oslo Afro Arts Festival (OAAF) will be held from 26-29 August 2021 in different venues in Grønland, Oslo, where more than 20 nationalities will be represented in up to 15 events over four days. The expected audience is 1200 at this year’s events, where various performances will be aimed towards children and youth.

Oslo Afro Arts Festival (OAAF) was founded in 2014 by Cecilie Giskemo, a Norwegian jazz vocalist and composer. The festival runs annually to celebrate contributions from African tradition and culture in Norway through art, music, food, discussions and seminars.

“When I left Africa in 2012, Zimbabwe was in turmoil, and the news only covered all the negative sides of the country’s situation. I felt there was a need to also show all the amazing stuff that was going on, and I focused on arts and culture. I was lucky to get involved in the arts and activism communities in Harare, and worked with amazing poets, freedom fighters, hip hop artists and musicians working with traditional Zimbabwean music,” says Giskemo.

Giskemo has also run several cross-cultural arts projects, teaching music in countries like Zimbabwe and Nepal. Giskemo and four other Oslo-based Zimbabweans started Zimfest in 2014 and two years later, expanded the concept to involve all other African countries.

“Zimfest Oslo became the Oslo Afro Arts Festival. The idea was to collaborate with the then called Bergen Afro Arts festival and also aim to expand the concept to other big cities in Norway. In that way, African artists travelling to Norway could tour several festivals, rather than just playing at one, and also, African arts and culture could be more visible all over Norway,” adds Giskemo.

OAAF aims to work in line with the guidelines of the UN goals of International Decade for People of African Descent through promoting respect, protection and fulfilment of all human rights and fundamental freedom for people of African origin.

Celebrating the diversity of art and music that is driven by African tradition and culture in Norway, the 2021 edition of the OAAF includes live concerts organised by various artists with captivating sounds such as BEHARIE, B Da Sufi Akuvi and Germini Orleans, which will be accompanied by various Afro dance workshops for children.

In his paintings, the artist evokes the sensations that many refugees experience throughout their journey. He addresses the feeling of being out of place while offering us the opportunity to see the world through the prism that combines his memories, his traumas and the struggle that will hopefully lead us to appreciate the beauty of the world around us.

Other highlights include a lecture on decolonisation of the stage, taking a critical look at the function of art and culture in society, through Norwegian-Afro-Caribbean artist Thomas Talawa Prestø; and a panel discussion on being queer in Africa, as there is a false belief in many African countries that homosexuality is “un-African” and something that has been imported from the West.

OAAF Dedicates to Lifting Up Artists

Giskemo was also a producer at Samspill International Music Network until 2019, and there she realised that there were so many amazing musicians from all over Africa living in Oslo and elsewhere in Norway. She hopes that the festival can contribute towards facilitating a stage for these artists.

“I hope the festival can bridge the gap between Norway and Africa, and be a networking platform for all kinds of artistic expressions, for African communities and people interested in African arts and culture,” says Giskemo.

“I hope all African communities will get a sense of ownership in the festival and get more involved in representing different countries from the continent. Furthermore, people and artists that are interested in or involved with Africa are important contributors, both on stage or in the audience, as well as children and families and young people.”

In a time where COVID-19 has brought the world to an almost standstill with a lot of uncertainty, the Oslo Afro Arts Festival allows us to promote freedom of speech, human resilience, and bring everyone closer through the performances of African artist refugees and artists of African descendants living in Norway.

Director of Festival, George Daniels says, “We are taking all the precautions provided by Oslo Kommune and at the same time, we want to provide a space to lighten up the pandemic situation.”

On why the festival is important, he says “For me, it is all about leaving a legacy and for my children to be exposed to African culture. I want to be part of uplifting African culture and arts, and I hope through the festival, we can highlight this even more where it has not been done before. For example, in Africa, the topic of being queer is a taboo subject. So we have a special session on this at the festival to discuss it. Another is an exhibit where we want refugees to be seen as human beings through the works of Octopizzo. People don’t see this side often.”

Part One – Migration of the Soul
Wednesday 25th August – Sunday 29th August 12PM-5PM at Kunsthall Oslo
“Migration of the Soul” is part of a two-part exhibition platforming refugee and former refugee artists, curated in collaboration with the Oslo-based former refugee painter Khalid Shatta. The exhibition at Kunsthall Oslo presents the masterful paintings and sketches of Khalid.

When discussing the subject of migration, Khalid does not refer to physical migration, but to the sensation of being out of place, and the question of belonging in spirit. His art discusses how our memories, stress, trauma and depression prevent us from utilising our full potential, and how we can be enabled to enjoy the beautiful aspects of the world surrounding us.

Khalid’s work is inspired by modernist painters, but also by ancient civilization and culture, and highly influenced by the diverse local figurative style and patterns of his birthplace, Sudan. In his paintings, Khalid aims to portray the vast diversity of forms, colours, patterns, sounds and smells deriving from the country, looking to explore the concept of painting in different contexts, forms, and styles.

Part Two – Refugee, genius, us
Friday 27th August 5PM-10PM & Saturday 28th August 10AM – 10PM
“Refugee, genius,us ” is part of a two-part exhibition platforming refugee and former refugee artists. OAAF, in collaboration with the Oslo-based painter and curator Khalid Shatta, will be celebrating the creations of otherwise marginalised artists. The title highlights the artistic talent that is being showcased, and the power of collective creation which forms the fundament of the exhibition project.

It is also a homage to the “Refugeenius” album, one of the inspirations behind this project. The album is a beautiful piece of art in which artists from refugee camps in Kenya collaborated with Octopizzo, one of Kenya’s most profiled hip-hop artists, to produce music pieces and videos. We now have the unique opportunity to showcase their work alongside the masterful paintings of Khalid Shatta.

Khalid’s work is inspired by modernist painters, but also by ancient civilization and culture, and highly influenced by the diverse local figurative style and patterns of his birthplace, Sudan. In his paintings, Khalid aims to portray the vast diversity of forms, colours, patterns, sounds and smells deriving from the country.

The photographs that are showcased in the exhibition will be available for purchase. The sale proceeds will be donated to programs of the Octopizzo Foundation which empower youth in slums and refugee camps in Kenya through music, arts, creativity, and sports.

With a long career in the artistic world and his Norwegian-Afro-Caribbean background, Thomas Talawa Prestø has taken a critical look at the function of art and culture in society. He aims to discuss the necessity of having a decolonial understanding of non-colonial artistic and cultural expressions by elaborating around the epistemological differences between African and Western lens and cosmology.

There is a false belief in many African countries that homosexuality is “un-African” and something that has been imported from the West. The penal codes, often inherited from the colonial era, criminalize homosexuality and the punishment varies from years in prison to the death penalty.

This panel, led by Dr. Haley McEwen, Researcher at the Centre for Diversity Studies and Associate Editor at the International Journal of Critical Diversity Studies, addresses the roots of queerness in African societies, how did colonialism impact the situation for queer African people and questions what is the way forward based on research that shows that in many African communities’ fluid sexual identities were accepted and never criminalised.

About Oslo Afro Arts Festival
Oslo Afro Arts Festival (OAAF) was founded by Cecilie Giskemo in 2014 and runs annually in Oslo to celebrate the diversity of art and music driving from African tradition and culture in Norway. OAAF aims to work inline within the guidelines of the UN goals of International Decade for People of African Descent through promoting respect, protection and fulfilment of all human rights and fundamental freedom for people of African origin.

This article is part of a journal series produced by The Oslo Desk in collaboration with Oslo Afro Arts Festival.