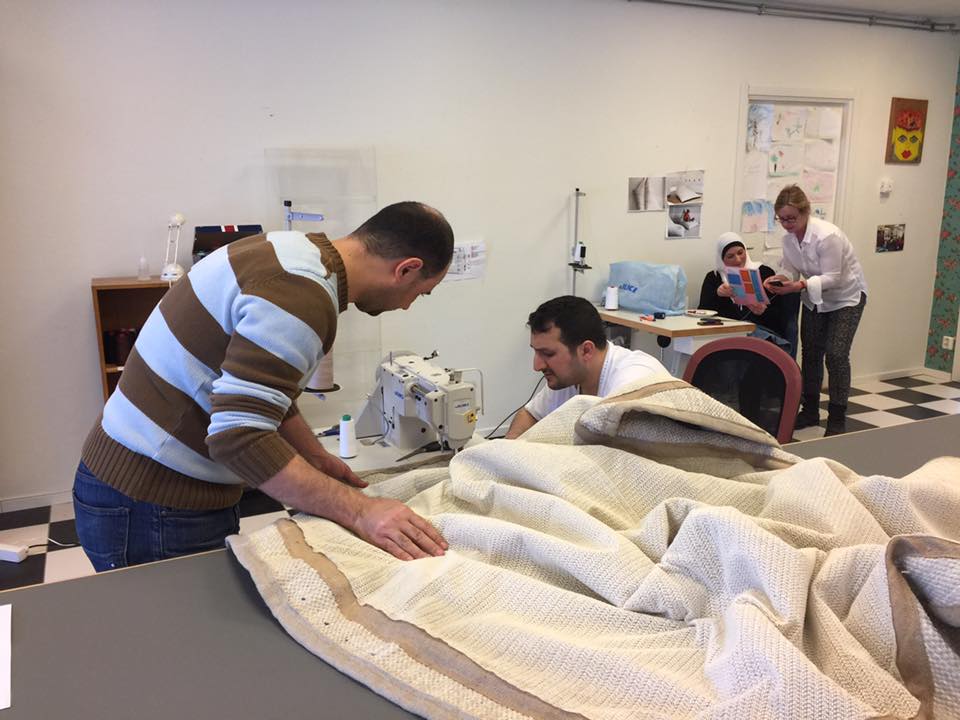 Educating people with mental disabilities is something Beatrice Alger had worked with for a very long time. By teaching them in classrooms, she hoped that they learn enough skills and knowledge to be re-integrated into the labour market. Hard as she tried, it was very difficult to get employers interested in hiring them because of their intellectual disabilities.

So, 10 years ago, she started social enterprises and hired her students. Forum Skill was born and Alger became its first director.

Forum Skill is a resource organization that has human rights as a starting point, and runs several different projects and activities. Their operations consists of work-integrated social enterprises, rehabilitative cultural work and an educational unit.

“One of the human rights is the right to work, and so together with persons who have difficulty to enter the work market, we have decided to focus on this target group and support them to start something together,” said Alger on the driving force of their organization.

One of their target group is the newcomer group consisting of persons with psychiatric mental problems and other disabilities. Forum Skill works with them to give them a better chance at integration in the labour market.

Alger believed that everybody can do something in Sweden and wanted to get rid of the tendency in Sweden and in other countries to label people and put them into boxes. Through setting up Forum Skill, they are making a lot of training materials for persons with disabilities and immigrants who just came to Sweden and are looking for work.

Together with Alger, Randi Myhre runs Forum Skill as its project leader.

Originally from Norway, Myhre moved to Sweden after 15 years of working in various intercultural development projects. She has worked with ForumSkill’s social enterprises, such as Mamas Retro and Tråd & Trade.  Her training as a language teacher led her to start social enterprises, such as Swedish Work that produces educational training materials for the workplace to train newcomers who want to learn the language while at work.

Today, Forum Skill is at the helm of two social enterprises under the Work Integration Social Enterprises (WISE), that facilitates rehabilitative cultural work; and runs an educational section that offers lectures, workshops and educational material in areas such as social enterprise, work environment, sexuality and functionality. All these activities are aimed at increasing empowerment and meeting challenges in society such as alienation and inaccessibility.

The two social enterprises that Forum Skill run at present are Mamas Retro and Tråd & Trade in Göteborg and Gårdsten.

Mamas Retro consists of two second-hand shops in central Göteborg and in Gårdsten that sell children’s wear, toys and other articles for children. At the same time, they also offer opportunities for empowerment, rehabilitation, language training, work training, competence development and employment for long-term unemployed persons who identify themselves as women.

Tråd & Trade is another social enterprise located in Gårdsten, that was started in November 2016 together with refugees from Syria and Afghanistan with experience in tailoring and textile industry.

Both Alger and Myhre came to Norway in March to attend the three-day conference that will feature different European initiatives for an inclusive society as part of exchanging knowledge and practices under the project, Family+ which is partly funded by Eramus Plus programme of the European Union.

Since the conference was cancelled due to the coronavirus pandemic, they were interviewed by instead by The Oslo Desk in a podcast for a season on different inclusive practices for migrants in collaboration with the adult learning center, Oslo VO Rosenhof.  The podcast can be listened to here.

Alger hoped that by coming to Norway she will be able to take home with them something from Oslo and to see how the government of Norway interact with the social economy, and find out if it also sees social enterprise as a ”high status” initiative like they do in Italy.

“In Sweden it is quite hard, everybody say you are doing a fantastic job and you work with the people who are longest from the labour market but nobody wants to give us any money. They want us to do it for free,” she lamented.

Myhre has also heard about the excellence of Norwegian adult education and wanted to learn from these initiatives in Norway.

Both admitted that getting funding for their initiatives in Sweden is hard and the chase for funding from the municipality takes up most of their time to be able to sustain their small organization and pay for their four employees.

“We wish that I could say, for the enterprise to start, ok and you have funding for three years and we can really dig in and do good enterprise but it not easy.  But we do it and we do it well,” Alger said.

Inclusion and integration through social enterprise

Despite their struggle with funding, Forum Skill persisted as they think working for inclusion for newcomers and people with disabilities is a worthwhile cause.

“People need to be included and know that somebody believes in them, and we see them all the time that is why we keep going, because it’s worth it,” Alger added.

She also urged employers to look beyond language skills when hiring their employees and look instead for potential and competencies of those they will hire for their enterprises.

Myhre recounted their inclusion and integration experience of some of their tailors and seamstresses from Syria and Afghanistan at Tråd & Trade, one of their social enterprises.

When she started the social enterprise together with tailors and seamstress from Syria and Afghanistan, and Sweden, they could say “hello” and “goodbye” in Swedish.  They had only been in the country for a month and were attending language courses at Swedish school for immigrants. Once they started as trainees in the workplace, they picked up the language so fast that it had been an amazing journey for them.

The immigrants’ professional skills in the tailoring and textile industry and the language skills that Forum Skill provided, brought them together and made it possible to start and develop a social enterprise that was to become Tråd & Trade.

“To be able to create an enterprise together and develop an enterprise from scratch, that’s has been a totally amazing process. And people thought it was not possible,” Myhre said.

Three years on, the enterprise is thriving and the staff that had started as trainees for four months are now fully employed. Furthermore, not only have the language skills of their immigrant workers improved, the Swedes in the workplace have also started to learn Arabic and Dari from their co-workers.

“We were able to create a successful company together with amazing partners and customers,” Myhre added.

Alger also told the remarkable story of a young, shy boy with intellectual disability who got help from Forum Skill.

“They wanted to put him in day care, and I said if you do that, he is gonna die. Because it was horrible. And we employed him,” she recounted.

Today, the boy now 20 years old is doing well, has made considerable progress with his language skills and has since been taken under the wings of Syrian men.

Learning language in the workplace

Learning language in the workplace is something that Myhre recommends.

“You learn by speaking the language, and at the workplace if you have good colleagues, if you have a communicative environment and if you are invited to get involved to discuss and develop things together with your colleagues, the workplace can be an amazing place to learn,” she pointed out.

All it takes, she said, is a communicative workplace with supportive colleagues that also view language learning as a collective process.

“(Learning the language) is something that you do together. It’s a shared responsibility. You can’t learn to talk on your own,” Myhre also added.

Integration as a two-way process

“Integration is more about cultural exchanges rather than needing the immigrant to adopt the cultural identity of the majority of the population, “she added.

“The majority of the population, they are like door openers or gatekeepers,” Myhre said and pleaded for them to open the doors and give people a chance.

Integration for Alger also means learning from each other and not doing away with previous identities to adopt to a new country.

“Sometimes I feel that people who are coming to Sweden wants to integrate so much to be a Swede that they forgot who they are,” she observed.

What she really wanted to see is to know who they are and be able to learn from them.

To her learning about new cultures in another country is an interesting process and should be an act of “picking the raisins”, taking the best parts of the new discoveries and keeping them.