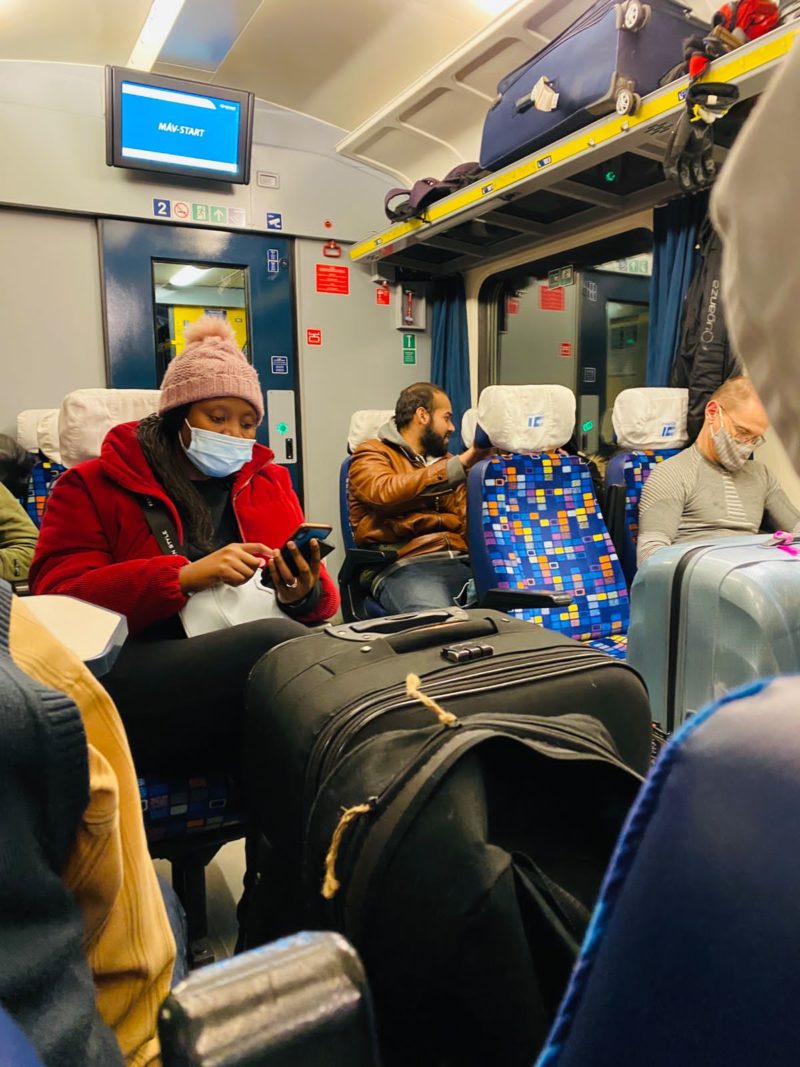 Nonkqubela Mnqwazi, is a South African medical student who had 2 weeks to go before finishing her degree when the war broke out. She is now back in South Africa and will be finishing her studies online and waiting for her University to make a statement regarding her final exam.

At the time of the invasion, Mnqwazi was alone at home, “I was woken up by a friend of mine around 2AM, saying that Russia has finally invaded Ukraine. But nothing had happened at Vinnytsia where I resided. So, we saw what was happening to other cities on the news. And then during the day, the whole apartment just started shaking and I was staying on the eighth floor.” Glasses were heard breaking and in her WhatsApp group, other students were asking whether they felt it the shake.

“The sirens started ringing and we were sent messages to interpret them. If it rings more than 4 minutes, it’s dangerous to go to the nearest shelter.” She felt lost on what to do and saw many people outside running.

“So, if the sirens ring at 2AM, I have to take my school bag and run. I’m not supposed to go outside but I had no choice. It was terrifying. It was every day, and I don’t remember when it was the last time I had proper sleep before I arrived in South Africa.” Mnqwazi is claustrophobic so she doesn’t use elevators, and had to run from the eighth floor to find shelter kilometres away.

Mnqwazi didn’t have money to go home and was called by the ambassador who urged her to flee, “I told him that I can’t just leave Vinnytsia and go to another country when I do not have money. I will rather be stranded where I am than in a place that I don’t even know.”

At the Ukrainian border, she said “We stayed for a long time there. They took Ukrainians from the back to the front. I don’t know if it was racism or them panicking. Because honestly, we were treated differently.”

There is an assumption that African students have money and she felt taken advantage of by the bus driver, “Imagine in that crisis, there is war but the only thing they are thinking about is getting that 100 000 UAH for the bus, and leaving students behind just because they can’t afford.” Mnqwazi borrowed the money from a student to get on the bus.

It was frustrating for Mnqwazi while waiting in -12 degrees cold weather when seeing Ukrainian families given priority, even if they were relatives to a child.

On discrimination, she described a moment she witnessed “I remembered seeing two white people going to the bushes to go pee. But two black guys went after and immediately police started to follow them. And I was like okay maybe we were not supposed to pee but they let white people pee. Maybe I got it all wrong since it was two black guys going [to pee] after the Ukrainian ladies. I don’t know. But it was a struggle for us, that’s all I can say.”

Mnqwazi and the group of students she travelled with took two taxis to get to the Hungarian border, costing them 7 000 UAH (229 USD) in total. She noticed the mark difference on arrival, where people bought them warm tea and a police officer gave her biscuits, “We were welcomed properly.”

Through the Ambassador’s contact, which led her to two more contacts, they were able to find accommodation. Unfortunately, on the second day, they were kicked out as the owner needed space for herself as she had hosted quite a lot of people already and was feeling tired. She later found out that the owner who kicked them out went into a WhatsApp group and said that she was relieved that her group of students have left.

“I am the older one in the group, and we have an Indian girl who was very sick and the lady [the owner] saw that she was really sick. We didn’t sleep that night. The temperature was increasing, but she had the audacity to just say, ‘Leave. You can’t sleep here.’”

Natalie Babos, one of her contacts who has been giving emergency aid in Hungary, did eventually find alternative accommodation for them, but it was already too late. The Indian girl’s father had already booked them all a hotel. A lady sent them money to buy medicine which they gave to the Indian girl.

“It was really a lot. We were going through a lot. So eventually we found someone who paid for all our tickets. So they booked the ticket for all of us, and we left. Immediately when we left, people started reaching out to us. We’re gone. There was nothing else you can do anymore. We struggled and everyone was there but no one helped.”

Upon reflection, she thinks that what happened at the Ukrainian border may not be due to racism but panic as there were many more Ukrainians there than there were third-country nationals, “I can’t really judge them because if this was to happen in my own country, I’m sure that they would prioritise us. That’s what I think.”

When asked how she felt about the whole experience, she said “I’m traumatised. You know, even when someone drops something, I’m triggered. I’ve learnt a lot about how it is to be homeless, to mingle around the street where you don’t know where to sleep. I’ve learnt the value of water, shelter, food; the small things in life that I took for granted. We had 1 litre of water to share among us.”

Mnqwazi had stayed in Ukraine for almost 6 years and feels like it is her second home. For her, she is able to come home to South Africa and could only imagine what it would feel like for Ukrainians, “I pray that things get better for them.”

Even though Mnqwazi did not have a good experience in Hungary, she is very thankful for those who opened their homes and gave them clothes as some only carried their passport with them, “I know everyone is not like that.”

Like our work? Please consider to become a member or make a one-off donation at Buy Me A Coffee.