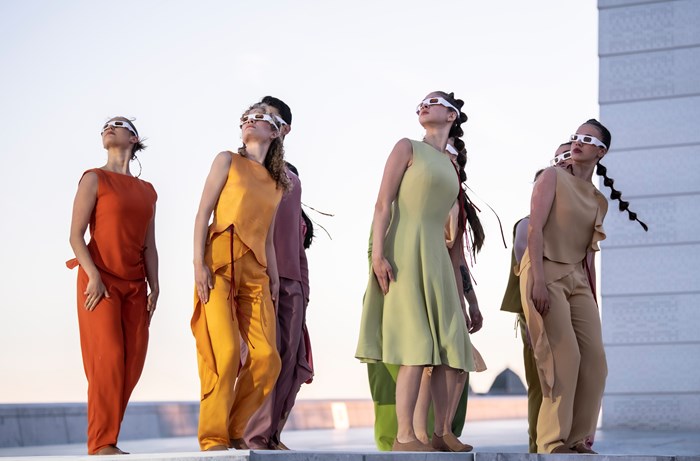 The Opera House rooftop was aglow with warm light as the sun just barely began to set around 21:30, a picture-perfect setting for the evening performance of Norwegian National Ballet’s “En midnattssolsdrøm” on Monday, 13 June. A choreographic and directorial collaboration between Marit Moum Aune and Kaloyan Boyadjiev, the ballet is a distinctly Nordic take on Shakespeare’s classic tale, “A Midsummer Night’s Dream.” While the timeless play has been adapted into countless large-scale ballets with elaborate sets and costumes, Moum Aune and Boyadjiev stripped the story to its essential elements and framed it around the changing seasons and the iconic Midnight Sun phenomena.

Though not quite midsummer in mid-June, the Norwegian National Ballet took advantage of its rooftop performance space to transform the everyday atmosphere into a magical setting. With a picturesque view of the fjord and the occasional bird flying overhead, the audience became a part of their world sitting in rows of chairs facing the stage.

The Monday evening performance was abbreviated due to inclement weather conditions a few hours before showtime. An announcement about the changes was made prior to the show, and parts of the “winter section” were cut for the dancers’ safety, as the floor was not completely dry from the rain.

The condensed ballet felt more like a reversal of the seasons, opening with spring, skating through a brief winter, wandering through fall, and beginning and ending with Oslo’s surrounding summertime environment. The music throughout was a mix of Peter Baden and Felix Mendelssohn’s work, merging electronic beats with symphonic scores to mark the changing seasons.

Dancers entered from the side, hidden behind a structure on the roof, and stepped onto the smooth stage, which was elevated next to a patch of faux grass with green bushes. This opening section included the whole cast onstage clad in a rainbow of monochromatic designs by Bregje van Balen. The streamlined, flowing fabric and red strings incorporated into elaborate hairstyles fluttered in the breeze, adding a sense of natural magic that can’t be replicated in real life.

The group undulated and performed a series of unison and canonic gestural phrases to a driving electronic musical score. The four lovers — Hermia, Lysander, Helena, and Demetrius — were indistinguishable from the colorful corps de ballet until the very end, when they began to separate from the group. Two duets followed, the first featuring Hermia (Anaïs Touret) and Lysander (Vasilii Tkachenko) swooping and caressing followed by a cheeky duet between a determined Helena (Sonia Vinograd) and her unrequited lover, Demetrius (Alex Cuadros Joglar). For those unfamiliar familiar with the original play’s plot, the stripped-down characterization can take some time to follow — the acting is subdued, and the ballet jumps straight into the lovers’ muddled relationships without much exposition.

The evocative close contact and mutual strength between Touret and Tkachenko’s characters contrast Cuadros Joglar’s humorous resistance to Vinograd’s athletic affection, but their motives are unclear. Demetrius’s eager wooing of Hermia feels unfounded without context. Having a foundational knowledge of the general plot beforehand is necessary to becoming invested in the characters, but without it, Touret’s wide-eyed gaze while perched atop Tkachenko’s shoulders and Cuadros Joglar’s longing looks away from Vinograd’s flirtations insinuated the basics of unrequited love and covetousness. Their physicality expressed the gist of their romantic relationships.

A third duet shook up the narrative and complicated the plot. Titania and Oberon, portrayed by the otherworldly Grete Sofie Borud Nybakken and Shaakir Muhammad, emerged in icy blue and white sheer marbled trousers. They disrupted the warm tones and love-filled springtime section with an imposing and powerful partnership, emulating the essence of Shakespeare’s royal fairies sans their play counterpart’s combative relationship. With most of their dancing cut from the Monday evening performance, the royal roles felt more ambiguously inserted than vital to driving the plot. Nonetheless, the trio of duets formed the emotional basis of the 45-minute show. A distorted, muffled recording of a man’s voice reciting lines from “A Midsummer Night’s Dream” enhanced the mystical quality of the duet.

After the frosty pair exited with powerful, slow strides, the lovers’ roles reversed as in the original, though without Puck, the original play’s mischievous magical manipulator (in the original, Puck uses a magical flower that makes Lysander and Demetrius accidentally both fall in love with Helena, flipping the roles). Puck’s exclusion in the name of simplicity relegates the four lovers’ shifting loyalties to Titania and Oberon, but their captivating duet does not have a strong connection to the four lovers. The audience is left to connect the dots.

The program leaflet (Left). The stage is being wiped down after the rain (Right). Photo: Catja Christensen.

The boys both fought for Vinograd’s attention, both swinging her around as she complied, confused and disoriented. Compared to Touret and Tkachenko’s earlier duet, this trio featured less mutual strength and more male-dominated partnering. Touret tried to rekindle her pas with Tkachenko, but he rejected her, literally sliding her away from him on the slippery stage. This was an emotional peak for the shortened show, as Touret’s heartbreak was palpable with each desperate lunge.

The corps de ballet of 10 dancers acted as both simplified magical creatures and human set designs throughout the duets. After opening the evening alongside the four lovers, they returned midway through wearing yellow-tinted glasses. As instructed in the program, audience members put on their own pairs of matching glasses, tinting the world in an ochre wash of color. This was an innovative approach to addressing the lighting design limitations in an outdoor setting, if not somewhat gimmicky.

Later, the group returned with tall tree props with autumn leaves and swayed elegantly in the breeze as Touret ran through them, away from Tkachenko. This mix of props and dancers was one of the most visually captivating moments of the performance along with the Titania/Oberon costume design. The props transforming the space exemplified simplicity done right, providing a set change without the rigs backstage in a traditional theater.

“En midnattssolsdrøm” is a step further for the Norwegian National Ballet in experimenting with the immersive capacity of the rooftop stage. The pandemic ushered in a new era of outdoor performing, and Moum Aune and Boyadjiev chose the perfect early summer story to explore. Although the storytelling could have been pushed further, the captivating choreography and visually compelling use of props, both onstage and in the audience as with the tinted glasses, is an exciting taste of what is to come from the company.

Catja Christensen is a 3rd-year student at Connecticut College studying English Literature and Dance. Based on the East Coast of the United States, Christensen has interned with Final Bow for Yellowface (NYC) and The Washington Ballet (DC) and is currently an Opinions Editor at The College Voice independent student newspaper. As a biracial Filipina-American, Christensen is passionate about uplifting underrepresented voices and advocating for diversity and equity in the arts.