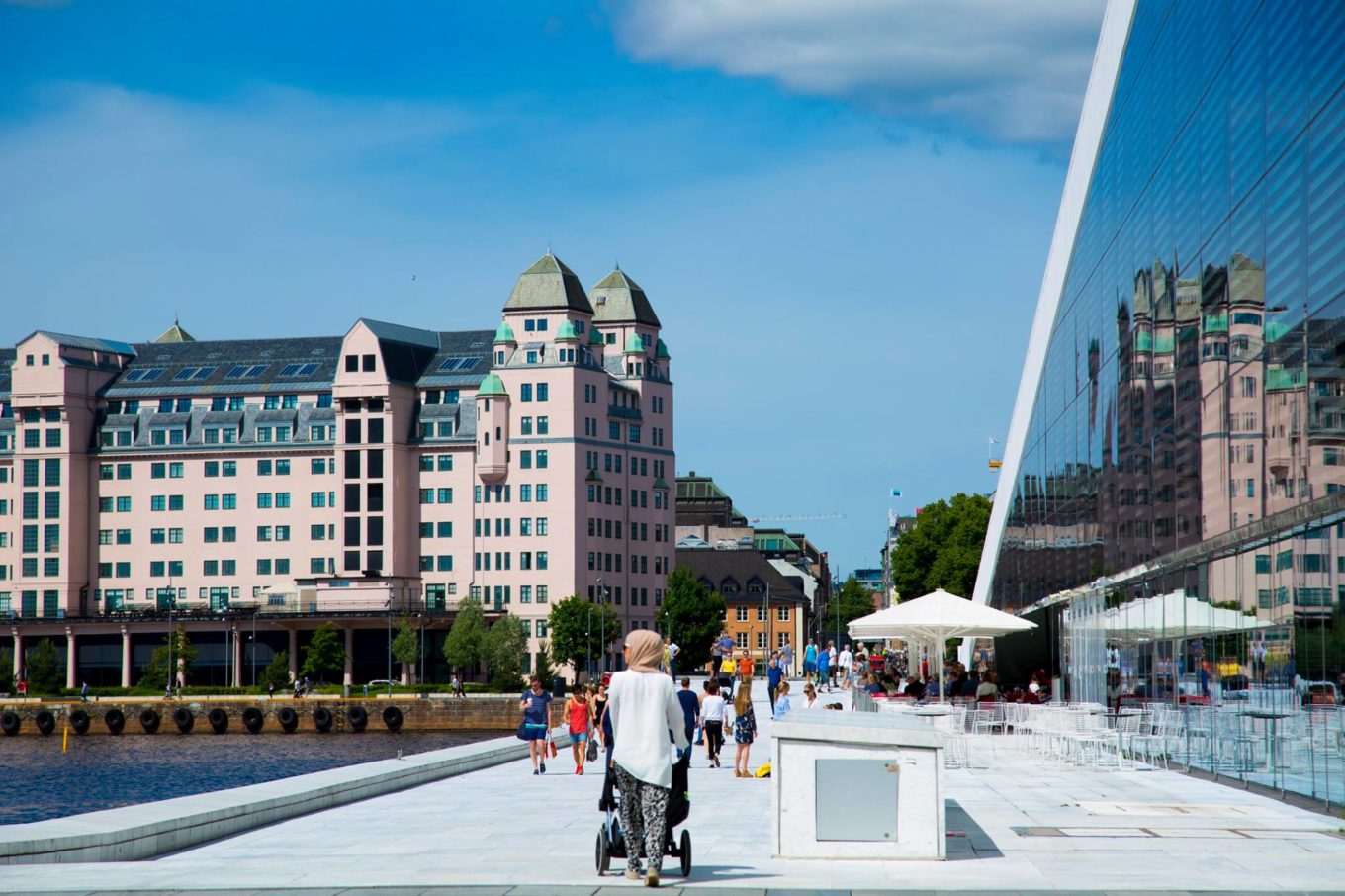 The capital city of Oslo in Norway is one of the fastest, growing cities in Europe with immigration accounting for two-thirds of population increase in the city since the 1990s. Until recently, the rise in the immigration population is mainly due to internal labor migration within the Nordic countries, and later following the opening of borders, labor migration from EU and the EEC countries.

At present, the three main reasons for migration to Norway are for work, flight and family reunification. The influx of more migrants from different cultural backgrounds makes Oslo a super diverse city with 15 districts and various multicultural neighborhoods.

However, the entry of more immigrants in Norway, especially in Oslo is putting a lot of pressure on the public sector to provide integration programs to help out the newly arrived foreign nationals in the country.

For now, most integration initiatives in Oslo are public sector-initiated and funded by the municipality and the state. Some of the examples of these initiatives are Introduction Program for newly arrived refugees and their families; and Jobbsjansen (Job Chance) for immigrant women under the Directorate of Integration and Diversity (IMDI); and the Primary School for Adults at Oslo Rosenhof VO that is under the Ministry of Education and Research.

All these Norwegian integration initiatives were supposed to be presented at the three-day conference between 11th and 13th of March in Oslo but instead, the said conference was cancelled due to the coronavirus pandemic.

The conference is part of a European study visit for the Family+ project that aimed at overcoming the social exclusion of families through family education and empowerment activities, adapted to the needs of disadvantaged and migrant families.

The Oslo Desk who was supposed to cover the event for Oslo VO Rosenhof and present their local investigations, but has instead managed under the circumstances to produce a podcast series and media coverage on the different initiatives.

The podcast series is titled, ‘European Initiatives for An Inclusive Society’ that aims to highlight and explore initiatives from Gothenburg in Sweden, Stuttgart in Germany and Oslo in Norway. The production is funded by the Erasmus plus programme of the European Union. The link to the podcast on the Norwegian public sector can be found here.

To integrate newly arrived foreign nationals in Norway, the state provides an introduction program that combines Norwegian language learning with job internships to facilitate the entry of newly arrived refugees and their families into the labor market.

At the Introduction Program in the Stovner district of Oslo, newly arrived refugees and their families are getting help in signing up for language courses and securing job internships after gaining better proficiency in the language for two years. This is so that they can become financially independent, enabling them to become an active participant not only in the job market but also in society.

According to the project leader, Donika Nura, the main purpose of the Introduction Program in the Stovner district is to integrate and to help immigrants into work so that they can become financially independent.

“Our main job (in the program) is to get them qualified for work in Norway and by doing so, they start learning Norwegian at Norwegian language training school for adults. While they learn Norwegian, depending on how quickly they learn the language, the participants in the program start having practice work at a regular job,” Nura added.

Refugees and their families who participate in the program receive financial support contingent on their attendance and completion of the program.

Nura also said that part of her job is to convince employers to take a chance at letting their participants get internships at their workplaces, and in doing so is involving the business sector in contributing to the common responsibility of helping the integration of new citizens in society.

Another integration program, Jobbsjansen (Job Opportunity Scheme) which goal is to help increase employment among immigrants that are outside of the labour force. It is a qualification program directed at immigrant women aged 18-55 years old who wants to get a job or start an education.

According to Elizabeth Larsen, program manager of Jobbsjansen who started it in 2013, there is a need to give immigrant women a fighting chance in order to succeed in entering the job market.

The decision to focus on immigrant women is deliberate.  The idea is to be able to include women who live in isolation for various reasons from the society, despite their long stay in Norway and increase women participation with immigrant backgrounds in the labor market.

Larsen described how some immigrant women have been living in isolation in their homes for 10 to 15 years; and in order to land a job, they need support and time to learn, gain new skills, and adapt to new rules in the Norwegian labour market.

Female participants to the program also get close follow-ups in their progress in the language, some are even signed up in Yrkesrettet Norskopplæring (YNO), meaning Norwegian work-oriented language training. They also have a Norwegian language teacher that visits them in their workplaces to assist them in meeting the linguistic requirements of the job.  Program coordinators also initiate dialogues with employers together with the participants on how to better help them gain knowledge and experience in the workplaces, that will eventually qualify them for a job.

And lastly, the Primary School Adult Education Program at Oslo Voksenopplæring (VO) Rosenhof for immigrants aged between 21-73 who want to take or finish primary education in Norway to qualify for jobs or higher education. Here they can realize their potentials, and become active and integrated members in society.

The program is open for adults who wants to obtain an elementary school diploma for further education and is free. Originally designed to give people who were unable to finish elementary school to complete their study. Today it mainly serves immigrants who have no or little education from their home countries and decided to learn Norwegian and finish primary school in Norway.

While its primary mandate of the Oslo Primary School for Adults is to provide education, Lene Løge Almqvist, who heads the school wonders how curriculum can be tweaked to respond to other needs of the student. For example, offering alternative pathways for learning for some students or prepare more integrated learning activities that can be helpful for students who may be interested in using their education to find a job rather than pursue higher learning.

In this regard, Almqvist revealed that the school office in Oslo is presently discussing possibilities to create several pathways in adult education by creating specialized programs within the primary school for adults to make learning outcomes more relevant for each participant. One of the programs will specialize in preparing students for further education, another program will be directed towards work skills education and the third that will be directed towards being an active citizen participating in their local community. All within fulfilling the primary school obligations as a state-funded educational institution.

She also said that some students need more help in learning Norwegian so they have formed a language support group among bilingual students with high proficiency in Norwegian to join classes of those they need help in translation and help support the staff. This support group is part of a national project.

“We try to recruit participants with different languages and from different backgrounds, and they join the classes on the lower levels, to work on their language skills but they are also a great support for the teachers and the other students,” Almqvist added.

At the moment, Almqvist thought that the curriculum that the primary school for adults is not flexible enough to respond to the needs of adult learners. She saw the need to “widen the focus of the curriculum” to include the knowledge and skills and competencies that the students “need to be active citizens and gain control over their own lives to obtain the competencies.”

She stressed that the adult education school is facing a lot of structural and organizational challenges that hinder flexibility. She also pointed out how some participants are actually falling between different chairs and figure out how to help them by adjusting the system to ensure that fewer people fall through the cracks.

Almqvist further added that all the other stakeholders that have a bearing on creating the conditions for optimal learning of the students in adult education, should be able to communicate and coordinate their initiatives better to find solutions for each participant.

What Valborg Svånå, a project coordinator and service designer at Oslo VO Rosenhof, and also project manager of Family+ project, missed from their integration initiatives at the school, is the participation of the local community in turning public organizations into learning communities.

For her, it is high time for public sector education institutions like Oslo VO Rosenhof to test innovative approaches to create opportunities to involve entrepreneurs in competency building.  But she also thought that the cooperation among the different sectors from the public to the civil society sector should be based on a common understanding that sharing of practical experiences, professional competence, and network can increase awareness of the participant’s needs, and create better prerequisites for providing equal services.

Even UNESCO underscores the fundamental role of civil society organizations and NGOs in the urban setting, in promoting active citizenship and social integration.  In the education sector, UNESCO noted that inclusive education is central to the achievement of high-quality education for all learners and the development of more inclusive societies.

Need for a Social Equity Component for Adult Education

Svånå also pointed out an interesting fact in the Family+ project, in learning about integration in local communities, that it seemed Oslo Adult education “lacks a program where civil society actors can register needs for decentralized academic support structures along with capacity building” paving the way for collaboration between formal education and community-based education. Examples she provided for this would be where the teachers offer guidance to homework helpers for adult learners in the city boroughs of Oslo (Samvirkemodellen in Sagene); supporting language volunteers in migrant language education and Language Cafes; and offering post-natal groups with childminders to learn topic-based Norwegian language tuition in a safe environment for women with refugee backgrounds.

While the public sector continues to loom large in integration work in Norway, there is also a growing number of community-initiated programs that are embarking on integration work to facilitate the inclusion of immigrants and vulnerable groups in society. The challenge is how to channel public funds to strengthen cooperation and innovation across sectors especially in civil society.