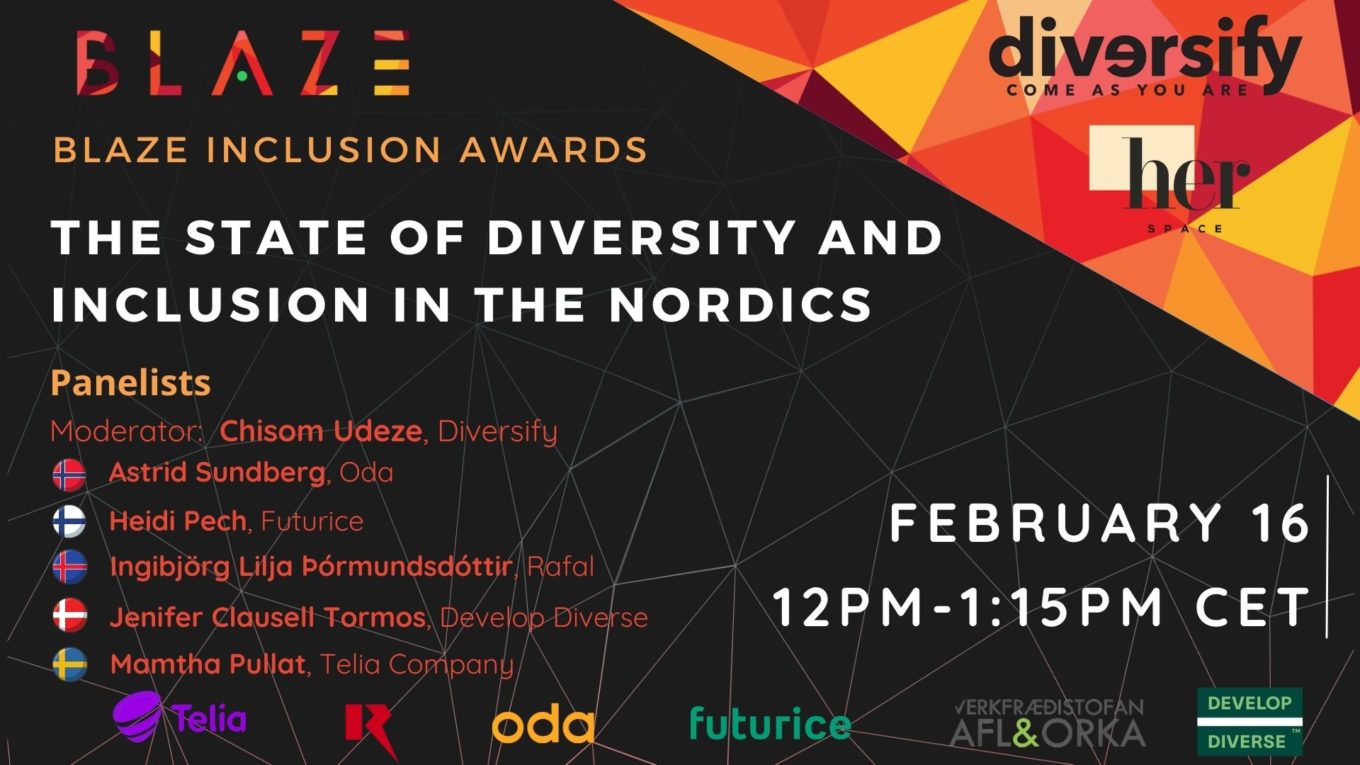 THIS Wednesday, Oslo-based organization, Diversify, will launch the Blaze Inclusion Awards (BIA), an ambitious and unique initiative that will celebrate Diversity, Equity, Inclusion and Belonging (DEIB) change-makers from across the Nordics.

The awards will open with an online panel discussion that highlights a representative from each of the Nordic countries to begin to map the state of diversity and inclusion across the region.

The initiative is the next step in furthering Diversify’s mandate to advance measurable diversity and inclusion strategies in companies across the world.

Diversify’s Founder, Chisom Udeze, says the awards are necessary to acknowledge those who are doing the work.

She said, “The BIA will give visibility to those who are authentically working to further DEIB strategies that have an impact, and demonstrate to companies that this work is a ‘need to have’, not just a ‘nice to have’.

“Nordic countries value equality and are often and deservedly praised for equality within their societies. However diversity is often synonymous with gender equality, and in terms of intersectionality, we quickly see that the representation of gender is binary and homogenous. We need to challenge this to be more inclusive of other diversity parameters.

“Over the 6 month period that the Blaze Inclusion Awards will span, there will be numerous opportunities to join the conversation. We launch with a panel discussion on Wednesday, February 16, when the nominations open.”

Udeze founded Diversity in 2018, and has since worked with her team on numerous projects, such as nationwide entrepreneurial training programs for minority groups, mentorship for skilled immigrants, and diversity and inclusion consulting both locally and internationally.

Another project is the “Diversity and Inclusion in the Workplace” panel discussions, which takes on a different topic each month. These discussions are open to the public and free of charge.

“We have been holding monthly panel discussions since December 2020. These discussions have a growing following across Europe and the US where the DEIB conversation is much more advanced than in Norway. We want to bring the Nordics up to speed.”

The nomination period opens on Wednesday. There will be 6 categories for which a mix of individuals and companies can be nominated. A national and regional voting period will follow the nominations to present an outright winner across the Nordics for each of the 6 categories.

Diversify is a registered non-profit organization based in Oslo, Norway.