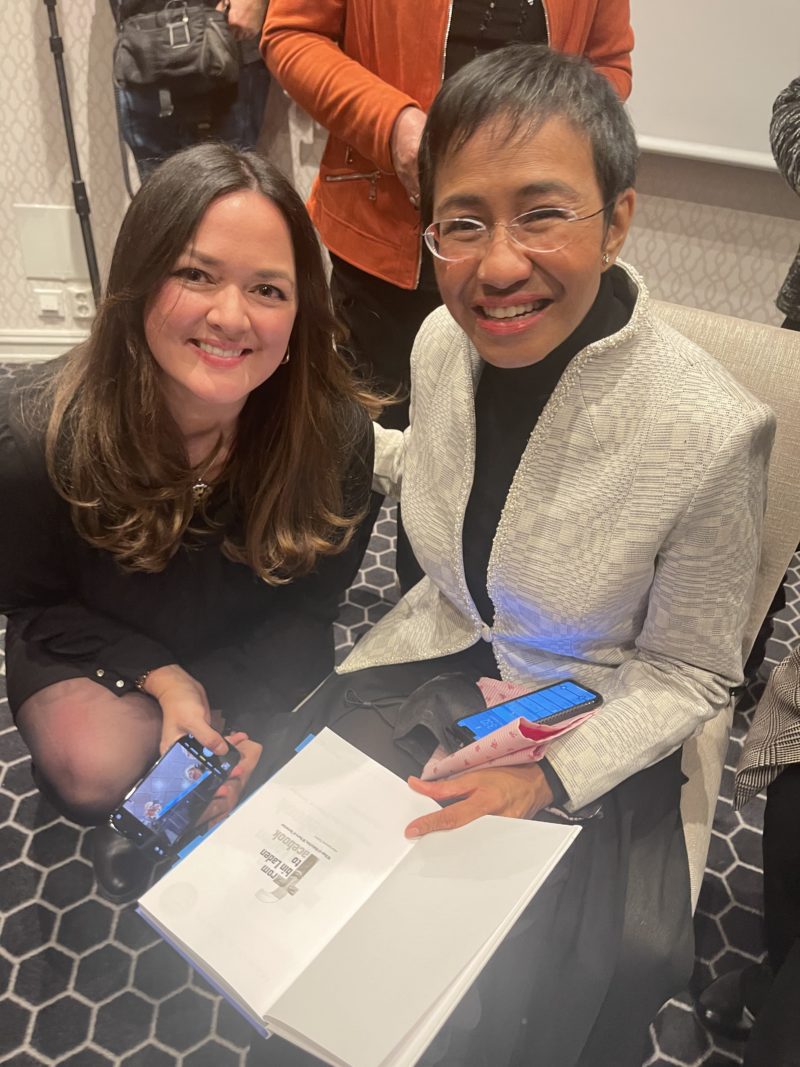 On Friday December 10th, Maria Ressa stood in Oslo, Norway and in front of the world she accepted the Nobel peace prize for her “courageous fight for freedom of expression” through her work as a journalist. Afterwards, she would go to the Hambro meeting room in Grand Hotel and meet with leaders of the Filipino community in Norway. In this room, I stood as a plus one invitee, with my heart beating in my throat as the only second-generation Pinoy-Norwegian not fluent in Filipino as the language was floating around me.

In 126 years, only 17 women have won the Nobel peace prize and this year Maria Ressa became number 18 and the first Filipino to ever win this prestigious award.

Filipinos are often stereotyped to be healthcare workers, au-pairs, cleaners, maids and hold other low-income positions. The locally famous rap-duo Karpe has a song called “au pair” where they rap “Pernille’s mom is from Manila, in my childhood she was my mother too”. And even in the room as Maria Ressa asked the local Filipino community leaders if there is a big community of Filipinos in Norway someone said “there are about 25,000” and then adding “they are mostly au pairs”. The irony of this statement in a room full of Filipinos, where not a single one was an au pair is not lost on me. Here we were; government workers, professors, teachers, entrepreneurs, accountants and journalists and still we were being reduced to a stereotype that not a single one of us represented.

Stereotypes come from single story narratives that are told over and over, reinforcing them, but on that Friday, Maria Ressa was changing the narrative for me and for Filipinos everywhere.

Filipinos are great at adapting and this is a double-edged sword when they go abroad. I often see Filipinos assimilate instead of integrating and as a second-generation Filipino who does not speak Tagalog and only visited the Philippines once during my childhood, I am a walking symbol of this. Pair this assimilation ability with the stereotypes and you have the recipe for dark shame that will have the following generations hiding behind the host culture instead of flaunting their heritage with pride.

Whether hiding or invisible, Filipinos remain an unseen minority performing unseen labour that is often vital like in the health sector where we are the third largest foreign group after Denmark and Sweden. It is almost as if we are reluctant to be seen – perhaps wary of scrutiny that can be turned against us? We have yet to have a Filipino in parliament, in government or a member of the judiciary, achievements that other minorities that came at the same time as Filipinos in the 1970’s were able to achieve. Why is that, and how do we change it?

Ms Ressa spoke to us about how toxic sludge spread in social media, how it was atomized by spreading from community to community before being pieced together as a whole. She then said it was important to take care of our own communities and use the same path and method for good. But when the branches of the Filipino family palm tree breaks off and becomes a pine tree in Norway how will it bear coconuts?

The coming generations living abroad are not learning Filipino history, they don’t speak the language, they no longer understand the culture, how can we then contribute to this fight if we barely understand it?

Coming into the meeting I thought Maria Ressa was crazy for going back to the Philippines when her dual citizenship would allow for her to just stay in the states. It is only in hindsight that I understand why her going back is the beacon we should all steer our ships towards.

The answers are hung on the wall behind her. She stands with all eyes on her in front of political pink posters where her quotes are printed: “an attack on one is an attack on all”, “in the battle for truth, you have to say who lies” and “silence is complicity” amongst others. And her famous tagline “HOLD THE LINE!” Is in big bold letters. These are all statements I can relate and agree to, but I feel like a gap in the line. I’m the weakest link, with my arms stretched out, desperately trying to grab a hold of something but it’s out of my reach because I don’t have the needed reach of knowledge and language. I asked Ma Ressa to sign her book for me that I had brought for the occasion and she elegantly penned “I wrote this in great hope that if we define the problem, we can find a solution.” I found hope in that too.

The community leaders vowed to form a community to stop the growing division among Filipinos and the spread of misinformation in social media. But in order to have community engagement, we have to first have community. I believe this begins with celebrating our culture, passing on our traditions and knowledge, teaching our history and preserving our language. Without these things, how do we band together? First and foremost we need to have a common understanding and a common goal otherwise our plight is aimless and can end up doing more harm than good.

The following week I went to work where my middle name and mom’s maiden name is not on my office door because I chose to remove it on my job applications to avoid being racially discriminated against when applying for jobs. I added my full name to the sign and colleagues started asking about it. “My mom is Filipino” I would say, and every time I am met with wide eyes and “ooooh really?” I had managed to hide myself and my heritage well, but I was ready to come out. The conversation has shifted now. Currently, it isn’t “my neighbour has a Filipino au pair”, instead it’s “a Filipino journalist just won the Nobel Peace Prize right?” And I am able to say with pride, “Yes she did, and I was lucky enough to meet with her, let me tell you the story.”

Marie III (or if we want my full name it’s: Marie Stephanie Casquio Fjeld) holds a degree in photography along with a bachelors degree in business; double majoring in communication and marketing. She long divided her time between Manila and Oslo working as a photographer, but has now settled in Oslo working as a government advisor. She still works freelance as a photographer and a writer and blogs under the name marie the third.