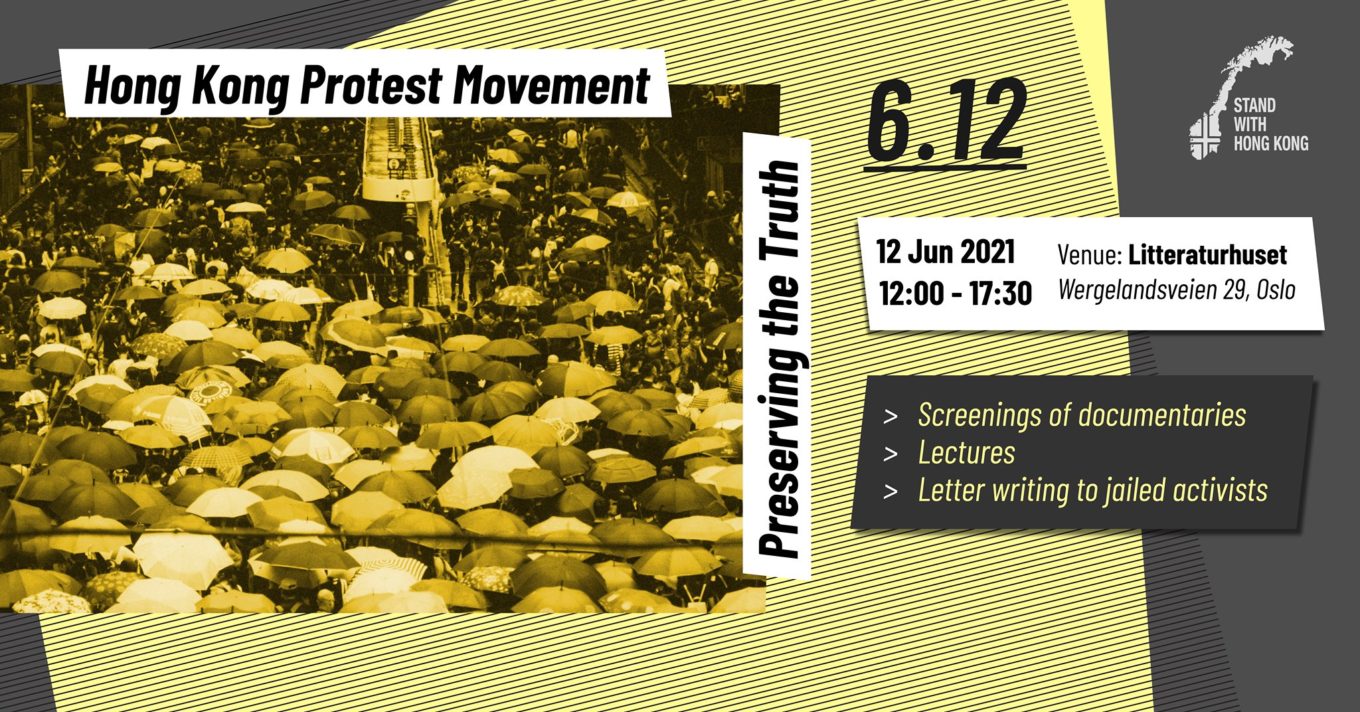 OSLO – On Saturday 12th June, 12pm to 5pm, Hong Kong Committee in Norway will run a programme filled with documentaries, photo reportages and panel discussions on the situation in Hong Kong. The documentaries include Oscar-nominated, ‘Do Not Split’; award-winning ‘Hong Kong Connection: 7.21 Who owns the truth’ and ‘Save PolyU’.

An interview with Jessica Chiu, Leader and Chairperson of Hong Kong Committee in Norway about this event:

Why is the committee doing this event? This June marks the 2nd anniversary of the Hong Kong protest movement. The Hong Kong Committee in Norway would like to join a call for a global solidarity event on this very special date: on 12th June 2019 tear gas was first fired by the Hong Kong police against peaceful demonstrations during the anti-extradition movement.  Then, during the second half of 2019 the degeneration of Hong Kong into a police state accelerated. While protesters’ demands for free elections and investigation of police brutality have not been fulfilled, over 10,000 people have been arrested since the 2019 protests. Over 2300 have been charged, with the youngest aged 13. Over 1500 people are still waiting for their trials which are scheduled until the end of 2023.

Our event aims at preserving and passing on our memories and the truth of the Hong Kong protest movement, which the authorities in Hong Kong and China are trying to ignore, remove or re-write.

Our event aims at preserving and passing on our memories and the truth of the Hong Kong protest movement, which the authorities in Hong Kong and China are trying to ignore, remove or re-write. In July 2020, Beijing brutally implemented the National Security Law in Hong Kong. Since then over 100 activists, including several dozens of pro-democratic politicians have been arrested under the law, some of them may face life imprisonment. The authorities have used the National Security Law to legitimise their suppression of Hong Kong people’s basic freedoms, including the freedom of speech and expression, freedom to protest, freedom of press. Books written by dissidents have been removed from the public libraries; documentaries made by the public TV broadcasters, including many reports of protest incidents, are being removed from their social media platforms and archives; sensitive political topics are banned in textbooks and classrooms whereas teachers can face disqualification upon an alleged violation of the National Security Law.

The Hong Kong protests were one of the biggest world events in 2019-2020. The Hong Kong Committee in Norway sees the importance of informing the Norwegian public about its happenings. Via screening of documentaries and sharing by eye-witnesses, we hope our audience can get a better understanding of the background and key incidents of the Hong Kong protest movement from various sources of first-hand information

Via letter and message writing campaigns, we hope we can provide a platform for our participants to contribute to the fight for basic human rights in Hong Kong with their solidarity messages. Every individual who has sympathy for our cause would be adding hope to those who are suffering from the deterioration of freedom and democracy in Hong Kong, including protesters who have been injured during clashes with the police, arrested, facing charges, sitting in custody/jail, etc.

What has been the progress you have made with your mission? The Hong Kong Committee in Norway is privileged to enjoy contact with film producers who allow us to screen Hong Kong documentaries, including the Oscar-nominated short documentary ‘Do Not Split’; and ‘Save PolyU’, which has never been screened in Norway before. We have brought together protesters (one from Norway and three from Hong Kong) who participated in the protests in 2019, and they share their experiences. We are also honoured to be able to host the event at one of the largest venues at the Litteraturhuset in Oslo.

Over 50% of the tickets have been booked by our supporting members as well individuals we have never met before.

The programme is designed for the audience to learn about the background of the Hong Kong protest movement and probe into some of the key incidents in more detail.

12:00-2:00 pm: “2019 Hong Kong eye witnesses” incl. screening of “Do Not Split”
– Introduction of the day
– A 30-min presentation about Hong Kong’s summer protests in 2019, by Deputy Leader of Hong Kong Committee in Norway, Arne Melsom
Screening of Oscar-nominated documentary “Do Not Split”, directed by award-winning Norwegian documentarist and journalist Anders Hammer. The 35-min documentary has captured “the determination and sacrifices of the protesters, the government’s backlash, and the passage of the new Beijing-backed national security law” in Hong Kong.
– A 45-min panel conversation with invited guest speakers that were in Hong Kong and witnessed the protests in 2019. 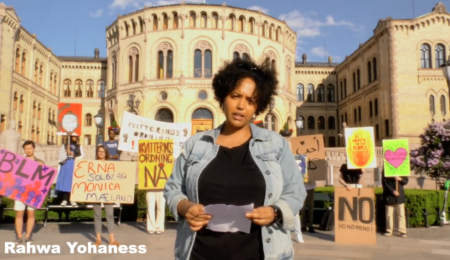