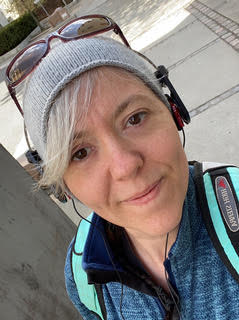 An account of the anti-war protest in Oslo on the 26th February 2022.

With my camera bag on my back, beanie and gloves, I was all set for the day. The streets were empty as I walked through the city centre to the café. Ka Man Mak, my editor, was already inside with a coffee when I entered. She had a big smile on her face, which calmed my nerves. This was going to be the first protest I had ever attended.

I ordered coffee and sat down with Ka Man to go over our plan for the day. Photojournalist was my role, and I was taking it very seriously. The responsibility to document and present a moment in Norwegian and world history didn’t escape me. I had many questions about photographing, meet up points, interviews and permissions. I asked about safety and what to do in an emergency – I wanted to be prepared for anything. Ka Man had all the answers, which made me feel more confident, that and her belief in me.

Taking pictures of all the posters was my assigned task, and the rest was up to me. I snapped a shot here and there, keeping my distance. I did not want to intrude on the people’s experience. But as I walked through the crowd, and people became aware that I was taking pictures, they stood still for me, holding up their voices in their hands. Words, pictures, collages… dramatic, crass, poetic… The voice of the people present was loud and clear.

As I moved more easily through the crowd, it became more difficult to hold back my tears. A few escaped down my face before I got in control of myself again. It was not my job to be a part of the crowd, but an observer, so I had to get it together. Taking more pictures and the start of the protest speeches helped me to regain my objective point of view.

The collective sadness of the crowd was undeniable. The mood was solemn, yet unity felt. Ukrainians were everywhere, their energy urgent and demanding. I got a sense of the people – it seemed they couldn’t believe this war was happening and that so little was being done to stop it.

I became more adventurous with my photography, moving from place to place to capture the whole crowd. Being confident pointing my camera at people, I become aware of who I was photographing – I wanted to truly represent the people present and photograph with a diversity conscious view. The quieter people, the shorter people, the people with no signs… I was enjoying capturing the differences. Though, I must say, it did seem like some people were underrepresented in the crowd.

A yellow and blue sign with red words – FUCK PUTIN – caught my attention. I was a little taken back at the swearing, but remembered that this is Norway. It is ironic that for such a calm country it is ok to use such aggressive words openly in public. As I got closer, I realised who was holding up the sign – a boy no more than ten years old. His parents stood beside him as he showed me his poster so I could take a picture. From the mouth of babes. I both thanked him and gave support with a small thumbs up.

As the Ukrainian Ambassador spoke, the energy of the people lifted. Hearing from one of their own countrymen, a leader, was needed. Between the speeches, chants and war cries and songs spontaneously erupted throughout the crowd. By the end, because of the convictions of the speakers and the new, stronger promises made by Norwegian representatives, I could feel the lift, the relief of hope, from the people.

The march to the Russian embassy was led by the Ukrainian colours – an impressively long blue and yellow flag held on the shoulders of Ukrainians. Past the National Theatre, the Royal Palace, the National Library and on to the Russian Embassy, the protest moved with intent. A Ukrainian man with a megaphone kept the energy high as the crowd assembled at the barricade already set up in Drammensveien.

More speeches focused the crowd on the concerns at hand, and a Ukrainian woman’s choir helped us to reflect on the importance of peace – that this is a time to be united, with many people, one voice. The crowd held together until the very end and then just like that, the protest was over.

Ka Man and I found each other. We were exhausted from the physicality needed to capture as much as we could, but the day was not over for us just yet. By interviewing several different internationals about the protest, we were able to capture stories that needed to be told. We met a Russian man and his Canadian husband, and learnt about the struggles of the Russian people trying to protest against the war in Ukraine, risking their jobs, their education and their freedom. We heard from a student of Peace and Conflict from Germany who is unhappy with the too little, too late economic sanctions on Russia her country has promised.

To rest, refuel and discuss plans for the content we had gathered, Ka Man and I stopped at another café. The main food cabinet was emptied and only a few sweet cakes sat in another glass case on top. The barista apologised, saying the food was quickly cleared out by the protesters. (A week later, I returned to the same café and the barista recognised me, asking if I was a photographer. My camera was hanging from my neck again. We talked about the protest and I learnt the barista had family in Ukraine. Relatives were driving from Poland to pick them up and help them across the border. It would no doubt be a dangerous journey, but the barista was calm and cheerful.) I returned to the seating area with a chocolate scone and coffee for me, and a hot chocolate for Ka Man.

Across from us on the other sofa sat three Ukrainian women, and Ka Man asked if we could interview them. They were happy to oblige, though, it was clear that they were exhausted from the day’s events, and as we found out, the anxiety of not knowing what was happening to their families currently in Ukraine. As they told their personal stories, I felt their agony of not being able to do anything to help their families other than call regularly. They talked of the nights of bombings and civilians taking up arms. They wanted Europe to help Ukraine stop the war but they also feared Putin’s retaliation – a nuclear war. Yet, they were happy to see so many support Ukraine in Oslo – over a thousand protesters were reported – and they felt hopeful, even with mending ties with Russia. “This is just a dark page in our history,” one of the women said.

That night and into Sunday, Ka Man and I worked hard to organise and present the content we had captured from the protest. Stories, pictures, impressions… everything was important, but we were the ones who had to choose what was to be posted on Social Media. A daunting task. Responsibility, duty, respect and truth all played a part in our decisions.

We had many discussions, thoughts and questions… and they did not stop, even after the content was published. All throughout the week, the war in Ukraine kept going, the bombardments and the killings, injustices and racism. It appalled us, made us angry and made us reflect on our own beliefs and opinions.

At a time when there should be unity against Putin and his tyranny, against war itself, the world has been quick to focus on double standards, hypocrisy and prejudices – it is pulling people apart. Yes, those things are definitely important to point out, recognise, to be accountable for, not tolerated and completely eliminated, but if they are used to drive a wedge between us, how can we possibly work together to eradicate such ugliness from the world?

There are many wars going on in the world right now, not just the one in Ukraine. However, Putin can wipe out most of the world’s population with the push of a button. He needs to be stopped so we can have the focus to correct ourselves, and pay due attention and effort to the other vulnerable peoples of this world and the wars they have been left in.

Leanna Lunde is an Australian and has lived in Norway for 18 years. Educated in Performing Arts, Leanna has worked in creative, technical and management positions for theatrical production companies, culture houses and festivals.