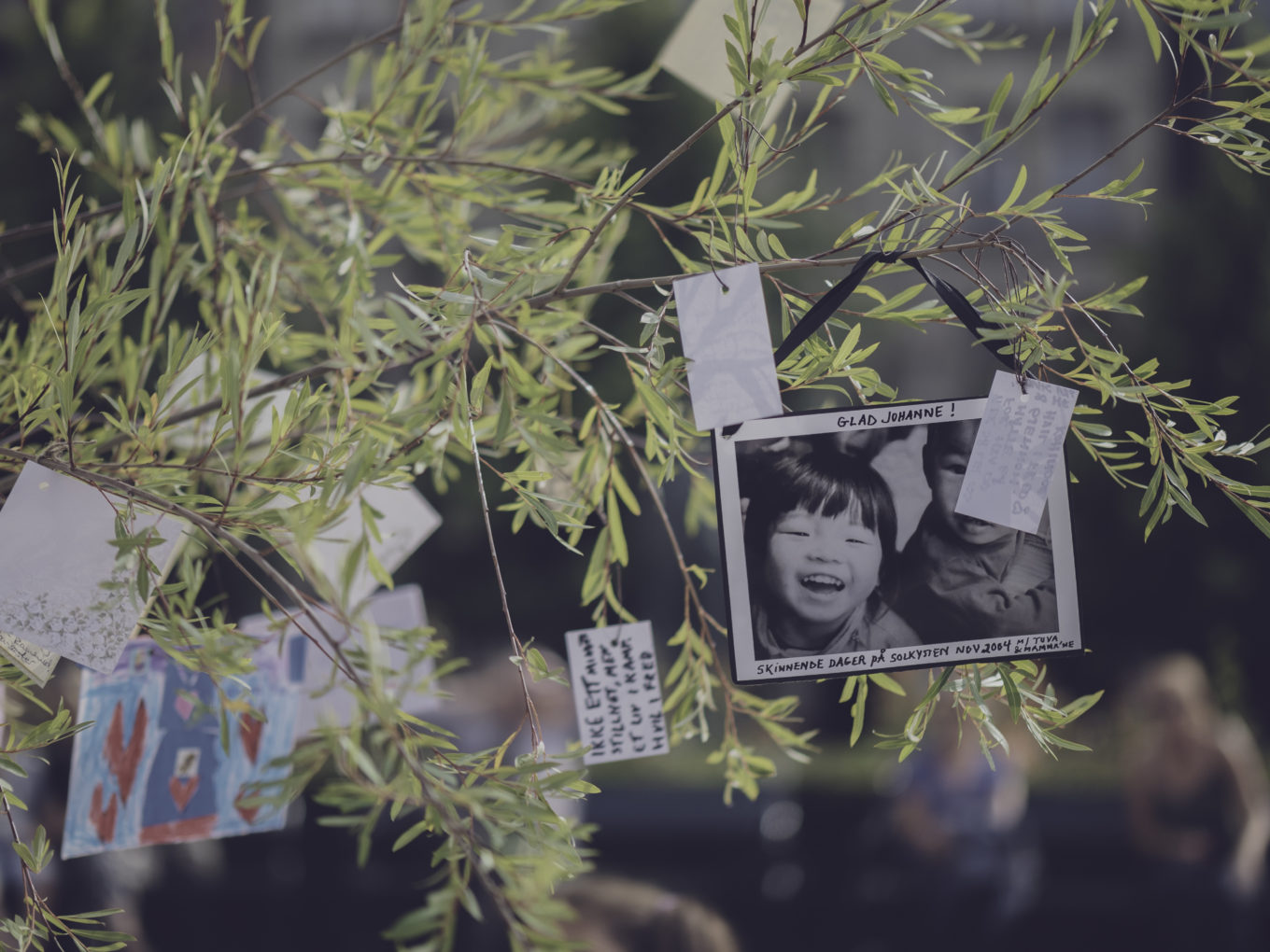 Remember her, they did. Around 20 people showed up for the commemoration of the first death anniversary of 17-year old Johanne Zhangjia Ihle-Hansen, who was brutally killed by her stepbrother last year, August 10.

Sadness hung heavily in the air as people tied notes, items, drawings and photos to the memory tree set up for those who would want to leave messages in Johanne´s memory in front of the Norwegian parliament.

Zhangjia was fatally shot four times, in quick succession in her bed at the family house in Eidsmarka shortly before her stepbrother drove to a nearby mosque to attack Muslims as part of his crusade for his race war. He told the police later that killing his adoptive sister and his attack on the mosque was something he “has to do.” He also admitted in a statement to the police that he killed his adoptive sister because she was from Asia.

“Since she was an adoptee from China, it hit us really hard. It is important for us to not forget her,” said Christina Violeta Thrane Storsve, one of the two organisers from the Intercountry Adoptees political committee (UAPO) told The Oslo Desk in an interview.

She recounted the group´s horror at the initial media coverage of the case where headlines did not mention the killing of Zhangjia before her stepbrother´s attack on a mosque in Bærum municipality.

“We were crying. One adoptee was killed, one adoptee that was promised a better future. It was important for us to jump in the streets literally before we even knew what was going on. All we knew was that she was an adoptee, she was one of us, and we want to stand up and say that is not ok,” Storsve recalled.

Johanne´s killer has been sentenced to 21 years in jail for the crime and he has not filed an appeal on his conviction. He was also ordered by the court to pay exemplary damages to his stepmother and his victims in the mosque attack.

Despite the tragedy, Storsve said Zhangjia´s murder opened the eyes of the Norwegians to the fact that “adoptees also live with racism from day one” and that there is a need to look closer into where racism appears as it does not only happen in the streets but also within families.

She also said that what happened to Zhangjia also showed that adoptees and their adoptive families need all the support they can get from the system. What they need, Strosve said, is guidance and support from public offices so that adoptees who are now up to 20,000 in Norway and their families will get help with their situation.

“I think that in some ways, it has helped us,” she said and that what happened to their little sister, highlighted the plight of the “invisible minority” in Norway, those adoptees who struggle with the same things as other minorities, even if they are in a way Norwegians but not completely so.

Chinese student Dennis Li was deeply moved by the death of Zhangjia and came to the event saying she reminded him of his little sister.

“If anything happens to her (his little sister), I will be crushed and I would not know what to do,” Li said.

He also said that he came to the event even if he does not know Johanne personally because “this is about being a minority, about racism. I always felt that Chinese people, Asian people have not been big (largely ignored) in media and we have to show it to people that we are people, too.”

He struggled to describe how he felt when he read about the murder in the news but said that he “hopes to see more people being aware that people are being racist to Asian people.”

While the interview was being conducted with Li, a young man wearing black shirt and on a bicycle, who was clearly following the interview, interrupted it by asking about the children who are disappearing in China. The TOD reporters firmly told him to back off and show some respect. It is not clear why the man did what he did and tried to stop Li from being interviewed by asking the question. The interview resumed after the incident.

Asked what he would tell Norwegian friends on what they can do about the situation in Norway, Li said that he hopes that “society knows more about racism against the minority community.”

“I will ask my (Norwegian) friend to share (about these things) in the news, social media and anywhere (so that) people can see,” he added.

He is also hoping for “a future where people can respect each other, (and realize) that we are alike, despite our races.”

Her outrage at the heinous murder of Zhangjia also led Live Morgana Guldvik to attend the event.

“I cannot just stand by while these things like these happen all the time. And every time it´s brought up, they always focus more on the person who committed the act and not on the reason it was committed or the person who was unfortunately was lost, Guldvik pointed out.

She also said that she found it horrible that extremists are getting more and more followers for each passing day and nothing is being done about it and that people are turning a blind eye to this.

“We need to look harder at the root causes as to why crimes like these happen. We need to take a closer look on our country and its hang ups with racism and nationality, Norway as a country has always have a strong sense of national pride which we have to re-evaluate what that means for our country,” she added.

Guldvik also believed that action must be taken by government and the media to make people understand that racism is not just an American issue, something that only happens outside of Norway.“We need to get off our high horse, that we have a tendency to say that none of these happen in Norway and they do, they happen all the time. People have just grown complacent,” she concluded.

Disclaimer: Since the article was published, the Intercountry Adoptee´s political committee wrote to The Oslo Desk on their take on the attendance to their event. UAPO wrote that 48 different memories were gathered from the memory tree and about 20/25 flowers were given. It also calculated that there were around 100 people that stopped by to pay their respects and to remember Johanne Zhangjia during the two-hour commemoration.

The Oslo Desk is not naming the killer of Johanne Zhangjia. We are taking a stand against the sensationalism of killers by not naming him and chose instead to focus our story on his victim and how other people are dealing with the crime committed against her. We also believe that by taking away focus on killers, we take away their power to persuade others to commit similar hate crimes.

The Oslo Desk is asking for your support to sustain our efforts to bring diversity in Norwegian journalism. If you think our stories take up issues that are largely unreported in the mainstream media in Norway, then we need your help to be able to continue to do so.

Send your contributions:
via VIPPS 611485 with a message “Donation to TOD” (Norway only).
via Ko-Fi (https://ko-fi.com/theoslodesk).