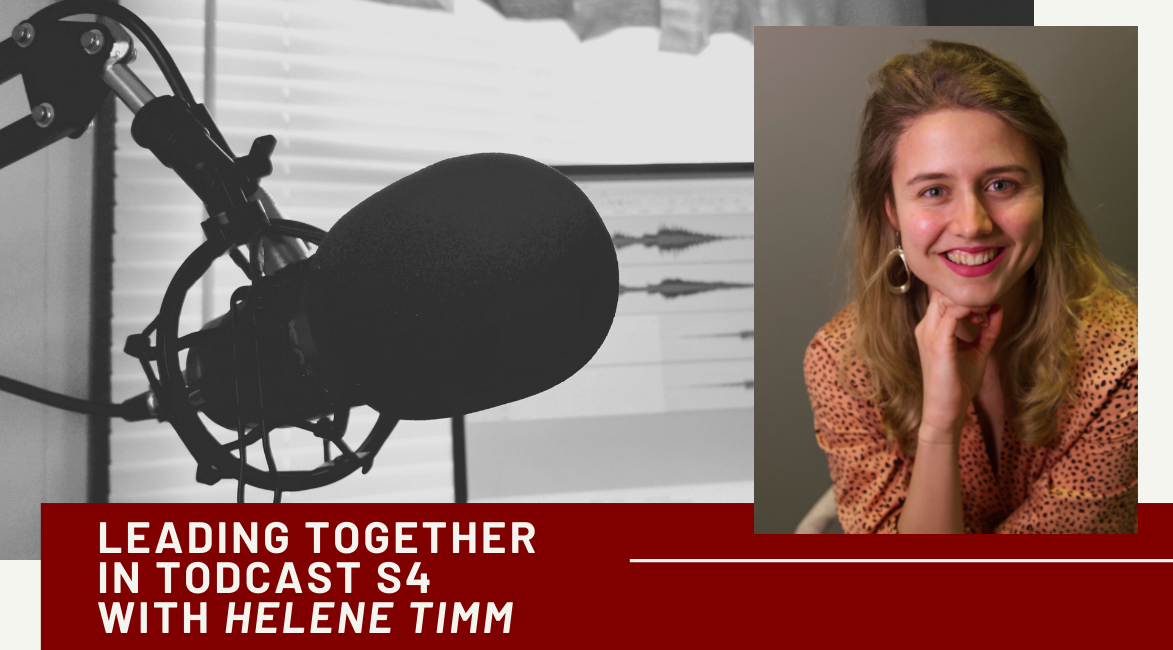 In an interview with Ka Man Mak, founder and journalist of The Oslo Desk, we go behind the making of the new podcast season on leadership with new young talent, Helene Timm who was given the podcast platform to follow her passion.

I am a Helene. I was raised by the German Baltic sea and since my childhood, I loved telling stories which I eagerly published in the school newspaper. In the Youth Media Association, I found likeminded people during my youth and recorded my first radio programs. The extra-curriculum activities next to school turned into my full-time studies at the university. I pursued my Bachelor in Cultural Studies and Aesthetic Practice in Hildesheim Germany. Here I continued creative writing, making podcasts and short documentaries. As part of the programme and editorial team of the re:publica, a conference for digital society in Berlin, I had a chance to put my planning skills to the test and enjoyed moderating stages and meeting people that had something to say.

Throughout my studies, I researched the power that arts and culture have on building communities, especially in the rural areas that I knew so well from my upbringing. It left me with the question of how (creative) communities organize themselves, which is why I began my Research Master in Cultural Leadership at the University of Groningen in the Netherlands. Due to my studies, I had a good reason to ask people questions and so I did. As a researcher at a Pop-up Space in Konstanz, Germany, I witnessed a creative community and its leadership emerge first hand on an industrial site. But as I always felt best being engaged in the matter, I also worked as the Pop-up Space manager. Since then the topic of leadership as a social process guided me throughout my master thesis and still has not left me.

After moving constantly throughout my studies, I found a new home in Oslo in July 2020, a more consistent one I like to believe. Love led me to Oslo and love is also what kept me here. With its seagulls and sailboats, I never really felt far from home.

I was sitting at a coffee place at Oslo S unemployed at the time (a place where I believe many unemployed immigrants meet) and watched the panel discussion moderated by Ka Man Mak that talked about skilled immigrants having trouble finding work in Norway. Although still privileged in many ways, I could really emphathise with the people and liked how Ka Man led the conversation. I thought about how to feature the talents and stories of immigrants in Norway and which journalistic measures it would take to neither turn them into victims nor simply complain. Little did I know that The Oslo Desk did already strive to do that in many ways. It became clearer to me when I met Ka Man for a coffee chat and we both felt like we should cooperate in some way. Here was my love for podcasts that had remained and my research on leadership that wanted to be picked up again outside of academia in “the real world”. So I decided to join forces with this wonderful platform that The Oslo Desk is and produce the fourth season of the TODcast. Since then I have enjoyed getting to know the team and its extended network. It always amazes me how people of so many different backgrounds can have so many similiar experiences when coming to Norway and how The Oslo Desk is amibitious to live an active and constructive journalism that truly wants to change the system for the better. Personally I feel heard here and like my professional experiences matters despite me not speaking Norwegian, that I can express myself in English while reflecting on being German or really a citizen of the world, as so many people here as well. The Oslo Desk granted me trust in my abilities and my ideas and provided mentorship and friendship- a great gift when being new in a place.

I think I always enjoyed observing the dynamics within groups and between people. Why do certain people seem to have more of a saying than others? How to include the talents and wisdom of many? Who starts a project and who maintains it and how ? I think those are questions that fit many contexts, but when I entered the field of arts and culture I often noticed that people don’t necessarily describe themselves as leaders. Nevertheless they deal with organizational questions like any other discipline. So there seems to be still a dominant narrative of leadership representing power and hierarchy but there is also a great interest and need to work together effectively as a team. And so I didn’t want to write off the term leadership but rather broaden my understanding of it, so that it would be more helpful to me and others.

We all make decisions and act. Often times these decisions and actions directly have an impact on those around us- in our personal life or in our work environment. We might not be officially in charge of our workplace but we help create the atmosphere in it.  And even when we are in charge of projects or our organisations, no person has ever succeeded alone. Therefore, it is time to acknowledge the social process it takes to make a project/firm/idea reality.

When I started the podcast I had not found employment yet, but it made me realize how easy it is to reach out to people even when they seem to be in high positions and quite busy as they have valuable lessons to share. At the same time it confirmed what we are discussing in this podcast, that collaboration happens beyond titles and labels and is about connecting on a human level. This compassionate sense of leadership is really what I see as the leadership of the future and as a way to lead during the pandemic. I was inspired by how willingly people shared their learnings with me and what great people I met this way. I think in regards to the topic of leadership as a social process I learned that certain settings still require an assigned leader that makes the final call and takes responsibility. Putting the assets of their team to use and communicating about their intent rather than micro-managing people seemed to be what most leaders I interviewed preferred. Another interesting insight I gained, is that there are parallels between the military and the business world as both of them can be established systems in which teamwork is often based on the trust that the system has preselected capable teammates. In general, I learned about situational awareness and adjusting one’s tools to what is needed. Therefore the leadership style within a team can or should even change depending on their tasks. For me, this confirms that leadership is an ongoing process that needs to be negotiated and adjusted.

I am a fan of connection, this applies to people but also to the activities in my life. The idea of a podcast about leadership did not come out of nowhere but was a natural continuation of the thoughts revolving around the observations I had made in the case study for my master thesis. When the Winterschool of my old university (in Groningen, NL) was coming up this January, I knew that I wanted to contribute something that was connected to the work I was doing right now- the podcast. I basically took advantage of the format to reflect on my podcast and discuss it with others. While the Winterschool “Crisis and Creativity” has a bit of a focus on the field of arts and culture (my background) I still believe that the insights I gained from my interdisciplinary podcast interviews are highly relevant to any sector. I structured my presentation around the 5 interviews I’ve had and turned them into 5 lessons for how to handle a crisis through leadership. Crisis was not the original focus of the interviews, but I think many lessons can be adapted to the crisis.

I summarised them as:

My intent with this podcast has been to look beyond the leader, mainly beyond the pedestal that leaders are put on. I know that due to the high expectations that come with the term “leader” and sometimes the idea of a mentality “do as I say”, people refuse to call themselves a leader. During the ACMC (Arts and Cultural Management Conference) this January, I wanted to reinterpret with others in arts or culture the term leadership, perhaps make it more applicable maybe even appearing. My workshop was called “Beyond the leader: reinterpreting ‘leadership’ for the cultural sector” and was also meant as an exchange and broadening of the discourse around leadership.

I think I want to inspire the audience to look at leadership more as an ongoing activity rather than a finished success story of one individual that made it all happen. I think many are drawn to these success stories and often its easier to simplify. But I personally believe that it should be our goal to worship person less and instead focus on ideas. That is not to ignore peoples stories but perhaps to tell more stories and perspectives. It’s about broadening the understanding of what leadership can mean and challenging individualism in leadership. Simply put: I want to celebrate ideas, processes and interactions rather than a persona.