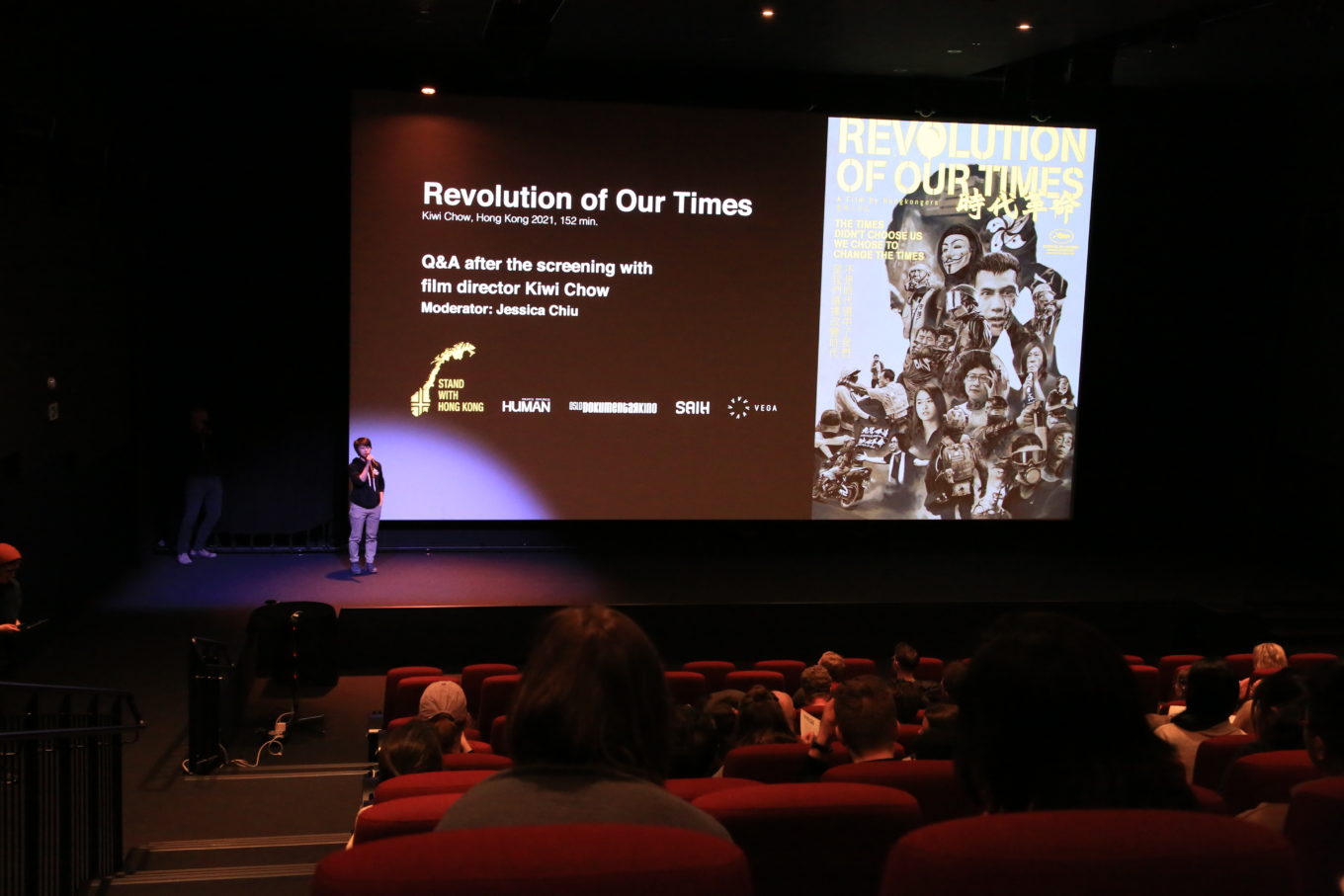 OSLO – On Saturday 9th April, at the Vega Scene cinema sat over 130 attendees eagerly awaited the first screening of the banned Hong Kong documentary film “Revolution of Our Times” hosted by Hong Kong Committee in Norway together with SAIH and Oslo Dokumentarkino.

“We are joining a global release of the film with many other cities in the world in early April so we are happy that we made it happen,” said Jessica Ka Yi Chiu, Leader of the Hong Kong Committee in Norway. “The film is forbidden in Hong Kong and the film director has expressed that he doesn’t want to leave Hong Kong even though he is at the risk of being arrested.”

The film’s title takes from the Hong Kong pro-democracy protest slogan, “Liberate Hong Kong. Revolutions of our times” which is now criminalised if seen used under the National Security Law. Edward Leung, a Hong Kong activist who coined the slogan has spent four years in prison over 2016 riots and was recently released.

“Some of my friends said it is a moment for us to come back together to reunite the force that we have, and continue our solidarity work afterwards. It is like collective memories because we have spent so many hours watching live videos of the protests in 2019, checking the news. Then we took a break because of the pandemic, and because of the National Security Law, there is no protest in Hong Kong. So, it is time for us to come together to watch what happened in Hong Kong again,” explained Chiu on the significance of the film.

Chiu furthered, “We know that things are happening around the world, like the Ukraine war. But we fight for the same thing. We fight for democracy. We fight for freedom. […] We hope that people don’t forget about Hong Kong.”

Arne Melsom, Deputy Leader of Hong Kong Committee in Norway got engaged in the committee after sending them some articles from his blog, Hong Kong Sett Fra Norge, and emphasised that the committee works for human rights, “Obviously, the situation in Hong Kong is where they should have autonomy for 50 years from 1997 and this was part of UN registered agreement between the British and the Chinese government so that agreement has been broken. So, I think it is everyone’s responsibility to follow up on that. It’s a UN issue.”

Just like Chiu, Melsom expressed that they hoped the documentary film will bring more awareness of what is happening in Hong Kong and how the protests unfolded; keeping it alive outside of Hong Kong.

The 2.5 hours documentary film is made and told by Hong Kongers to explore the decentralised leadership of the movement, as well as tactics such as “be water” (flexibility), “do not split” (a different form of unity) and “blossoming everywhere” (wide-ranging protests taking place across Hong Kong). A comprehensive account pulled together the stories from seven teams of protestors to picture the versatile movement, added to it is an analytical layer from interviews with academics.

An impressive thread of close-up and aerial footage unfolded key events during the movement from 2019 protests against the Extradition Bill, the Legislative Council occupation, the Yuen Long attack, and the Hong Kong’s Polytechnic University siege. The undeniable violence from the new gruelling footage witnessed a man who died from suicide, a body pushed off a building, rape accounts, close-range brutal shootings; and stumping on the head and neck of arrested protestors, where you hear them cry, “I can’t breathe” made it a distressing watch.

While the movement is faceless and leaderless, the film showed how protestors gathered together into groups to coordinate over specific tasks, such as “Drivers” who pick up protestors to ensure they escape the protests and reach home safely and “Sentries” provide real-time web mapping of protests and police whereabouts in the vicinity. Their personal accounts including high-school paramedic volunteer, reporters, social workers and a septuagenarian farmer painted the emotional turmoil, personal sacrifices and physical injuries they were subjected to.

The diverse voices and choices made by the individuals – to use violent or peaceful measures are debated and observed. A social worker recalled that she lent her microphone to a young girl who didn’t even know how to use it. These protestors are just kids, “not thugs” she said. By the end of the film, is an 11-year-old protestor who joined the movement without his parents knowing. Many of the protestors haven’t been home for a long time. You hear the Sentries lamenting about living a normal life where they can go hiking, go to gigs and get full-time jobs. An orchestra of musicians masked up in protestor gear then sang and played the Hong Kong national anthem, “Glory to Hong Kong”.

While the movement is considered a failure, Kiwi Chow wanted to end the film with a sense of hope because the movement itself is already painful, and many people have felt traumatised after feeling defeated from all their efforts, “However, in the movement, there have been many moments of human radiance – their unity, courage, their stubbornness to hold the frontline gave a sense of hope. So, I would like to capture that hope.” Chow felt moved by the youth who gave him hope.

Kiwi Chow, Film Director of Revolution of Our Times in a Q&A session with the audience. Photo: Ka Man Mak

Chow was also trapped at Hong Kong Polytechnic University for three days as the siege happened. In documenting the harrowing scenes, he doesn’t suppress his emotions and allowed himself to cry. On his thoughts on producing the films, he said “I wanted to convey their inner worlds through interviews. The two things I wanted to do in constructing this comprehensive film is to capture the truth of major events through a macroscopic lens where I can rationally analyse them by interviewing academics. Besides the macroscopic and rational point of view, I also wanted to show the microcosmic and sensational point of view, so I needed to rely on the crew and the protestors whom I followed to help me capture this part.”

The credits in the documentary film were anonymised for the safety of the crew except for Kiwi Chow and marked as “A Film by Hongkongers.” Many of those he had interviewed were either in prison or had lost contact. The film has won International Documentary Festival FIPADOC awards and the Golden Horse Award.

SAIH (Norwegian Students’ and Academics’ International Assistance Fund) student, Enka Velle Segelstad in reflection of the film said, “It’s very touching to see students fighting for their rights. It’s a lot happening. It’s a feeling that it could have been us.”

“What’s most interesting about this film or what’s most impressive is the way that it draws you in, and makes you feel what the people in the film feel that they are losing their lives, their society, their democracy, and this film brings you on the inside of it. You can feel what they feel. I think that’s an important message,” reflected Ketil Magnussen, founder and program director of Oslo Dokumentarkino. “Documentary films are extremely important. They’re important as a source of information. They cover things that the news media can’t. Both documentary film and news media support each other.”