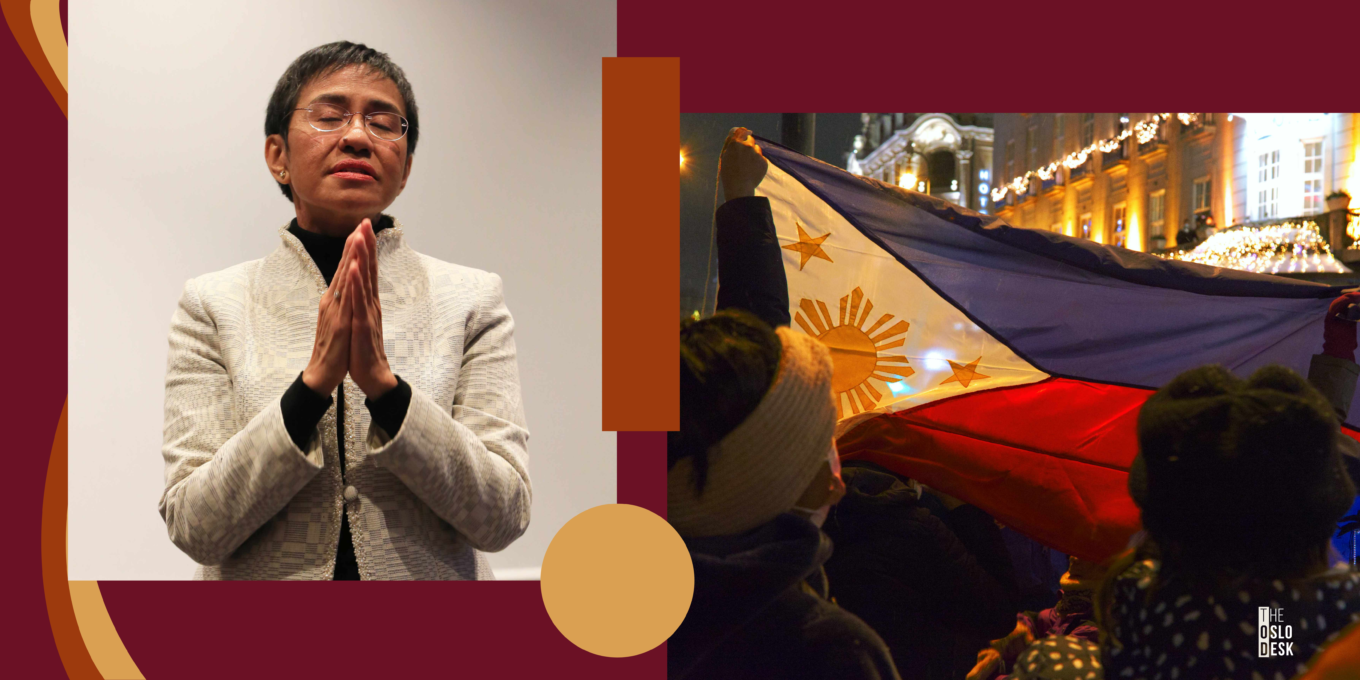 Filipino journalist and 2021 Nobel Peace Prize co-winner Maria Ressa met with Filipino community leaders at the Grand Hotel in Oslo right after she delivered her inspiring speech at the awarding ceremony held at the Oslo City Hall, on December 10th.

Ressa gave a shorter version of her speech at the awarding ceremony to the delight of the community leaders who had waited for hours to see her at the Grand Hotel.

In her characteristic hands clasped together gesture, Ressa implored the Filipino community leaders to do their part in curbing disinformation in social media and to spread the message of truth despite online threats and harassment. She enigmatically asked them what she said she has asked herself so many times before, “What are you willing to sacrifice for the truth?”

While addressing the community, Ressa would at times look up as if trying to recapture moments when she was standing in front of the Nobel Peace Prize awarding audience, grasping for words to convey her important message to those who want to hear.

Ressa raises her hands animatedly while trying to drive home a point about “surveillance capitalism and how everyone needs to hear how it impacts their lives and world democracy.

Ressa kept the community enthralled with her exhortations on what they can do to help restore trust in social media, fight the lies and defend democracy.

“Build ´communities of action´, Ressa challenges the Filipino community in Oslo saying much is expected of them considering they live in a democratic land where “most of the things work.”

“In a world where the rule of law exits, the cyberlibel case should have been thrown out,” Maria tells the leaders of how she was persecuted by Philippine president Rodrigo Duterte. She also rues the fact that there is so much poison in social media that it is becoming more difficult to sift truth from lies. “Once you are angry, you can believe anything,” is how she explains why there is so much hate and disinformation.

“You are not alone, that is what the Nobel Committee is saying, that is what I have heard from them,” she revealed to the leaders.

Ressa listens intently to a leader´s question, only to be told that she can be compared to Philippine national hero, Jose Rizal. She blurts back, “Don´t say that, he was shot!” to everyone´s laughter.

A place of honour is in the centre of the Filipino community. Ressa poses happily with the leaders who gathered in her honour and in her name.

Christmas glitter along the path of the Torch Parade at Karl Johan street to honour this year´s Nobel Peace laureates.

“We are Filipinos and tonight we march proudly along Karl Johan street bearing the national colours honouring the country´s very first Nobel laureate.”

Not without controversy, a banner carried by a group at the Torch Parade asks, “Where is Assange?” while in the same breath declaring we support Ressa and Muratov.

Filipinos gathered under the same flag, braving the wintry night on December 10th to show support to Maria Ressa.

Flags and cheers greeted Maria below the Grand Hotel balcony as Filipinos from all walks of life awaits her appearance. Some wear the pink colour, the symbol of hope.

“I´m here,” Maria might have been saying that to the crowd as she steps out on the balcony with co-winner Russian journalist Dmitrij Muratov. The Filipino crowd gets into a frenzy shouting, “Reesa, Ressa, di ka nag-iisa.” (Ressa, Ressa, you are not alone.)