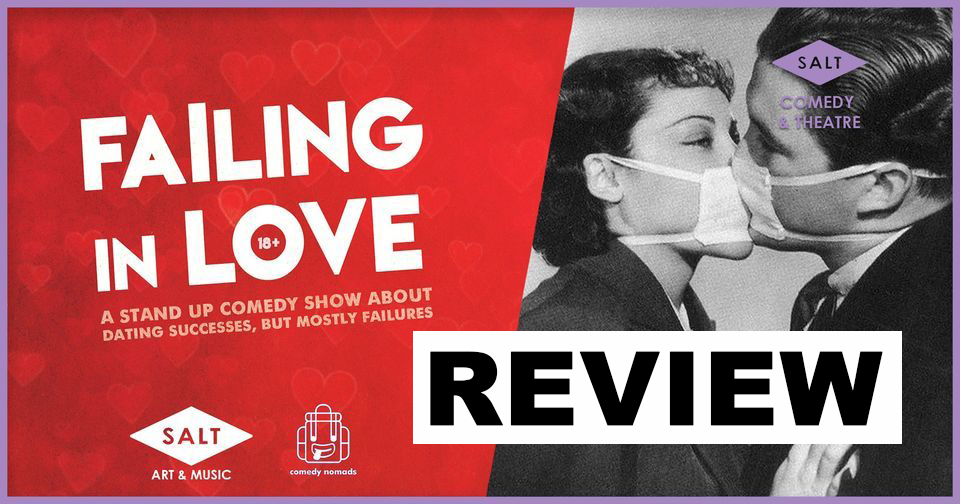 Salt, Oslo
Failing in Love, ‘a stand up comedy show about dating success, but mostly failures’, was one of the events on the program at Salt, Oslo, on Monday 25th April 2022. The show was hosted and produced by Victor Patrascan, a touring regular on the European comedy scene, in connection with The Comedy Nomad and Comedy Caravans. Comedy shows are a staple at Salt, and stand-up in English is a big draw for the international crowd in Oslo.

Failing in Love had caught my interest enough to venture out on a Monday night after a big weekend. I didn’t expect to find Langhuset arena at Salt to be as full as it was when I arrived. The cosy feel of the Viking hall with its bench tables and seating aligned in social rows made the perfect setup for a comedy event.

At the door we were greeted by a most jolly fellow, who would then turn out to be our MC for the night, Victor Patrascan. The crowd was made up of 25-35 year-olds and I did wonder if the comedy would be as sophisticated as I usually like. I was expecting outrageous and fantastical retellings of past dating experiences from the comedians… but I do enjoy six-foot jokes and subtle nudges. I was curious to find out if the comedians dating experiences have been like mine – not for the faint of heart. Well, hoping more than curious.

The opening announcement by Patrascan was to give us a rundown of the night – two comedians – Eirik Sørvik and Annalisa Barone – a break, and then two comedians – Jim Swann and Pernille Haaland – with an added recommendation to go to the toilet, get a drink and enjoy a particular sexual experience, (which I will not disclose for this PG review), before the show started. The crassness was an unexpected punch, but a good sign.

Patrascan warmed up the room with his wonderful Romanian accent. He began with soft topical humour and quickly won the favour of the crowd with his boyish charm. Questioning people from the crowd, he easily made comedy of their answers. Bouncing relationship advice from a hetero couple that have been together for ten years to a cute young queer couple on their first date made for great fun. Then he focused on a group of thirty-something ladies who had the best advice for a long relationship – to leave their partners at home.

The first act of the night was Eirik Sørvik, a Norwegian man from a very small village that shan’t be named. Even though this comic seemed quite new to the stage, he felt the crown and had the intuition to change track when he knew his story direction was not inspiring us. However, it seemed he didn’t get the memo on the theme for the night and loosely tided in his other stories as perhaps reasons for him not being successful at dating.

The second act was an Italian woman, Annalisa Barone, delightfully crass and sometimes quite dark. Some crowds are not used to a woman taking the mickey out of herself, especially when it touches on serious women’s issues. Quite risqué. However, her underwhelming beginning was a strategic setup to be able to appreciate the darker places she was going to take us. Her set seemed to end too soon, and her morbid cheek turned quickly into an awkward exit.

After the break, Patrascan, the MC, filled us in us on the woes of trying to make his female partner orgasm. This time, some of his jokes were a little more subtle and needed help with cute meta observations for the unsuspecting crowd to feel the lighter punches. And then came some finer points on how to access the male g-spot, eagerly demonstrated by Patrascan. The audience fell awfully quiet and it wasn’t clear what had just happened until the MC saved us with, ‘If you’re not laughing, you’re learning’. The room up-roared… and you know what they say: ‘The reason it is so funny is because it is so true!’ This brought the audience community back together to enjoy the second half of the night.

The third act was an English man, Jim Swann, who was straight about not being apparently gay, but ensured us that he was. He charmed with a few sweet stories of self-consciousness, only to set us up for a harder fall into the challenges of unprepared backdoor action. He was certainly using the ignorance of the hetero crowd to make them squirm with laughter, though for derriere connoisseurs, the tight-fitting account would seem quite retro.

And lastly was a Britt-Norwegian, Pernille Haaland, who knew how to take control of the crowd. Her entrance was very familiar, used by comedians on the professional circuit, and her energy felt like the headliner. There was one particular story about her upbringing that did not quite hit the mark and left an awkward feeling in the room. However, she was well aware, using ‘culture’ as an excuse, and quickly saved the moment by moving onto an irreverent story about meeting the boyfriend’s parents for the first time.

The show was quickly rounded off by the delightful Mr Patrascan plugging his next gig. It was good timing because my 40-something bony seat was feeling it on the thin padded benches. All-in-all the theme for the night was lightly addressed. I missed hearing about some real juicy stories from the comics. They talked about app chatting, first meets, bedroom scenes and very light kink, going to the usual taboo and non-PC places, but it was all very vanilla, really. Their dating life seemed pretty bland compared to… ahem… Let’s just say, there was nothing that made me think, ‘Wow, and I thought my dating life was messed up’, (which is what you really look for in a show with such a wonderfully ironic title). Nonetheless, the atmosphere in the Viking hall was satisfying and I had a good time.

Stand-up comedy in English at Salt was a great casual night out. It certainly hit the g-spot for the vanilla crowd. I would definitely recommend it if show makes it’s way back to Salt again. Lots of laughs, an easy-going crowd, and drinking beer on a Monday evening makes for a good week ahead.

CategoriesArt CULTURE AND BEYOND

Leanna Lunde is an Australian and has lived in Norway for 18 years. Educated in Performing Arts, Leanna has worked in creative, technical and management positions for theatrical production companies, culture houses and festivals.