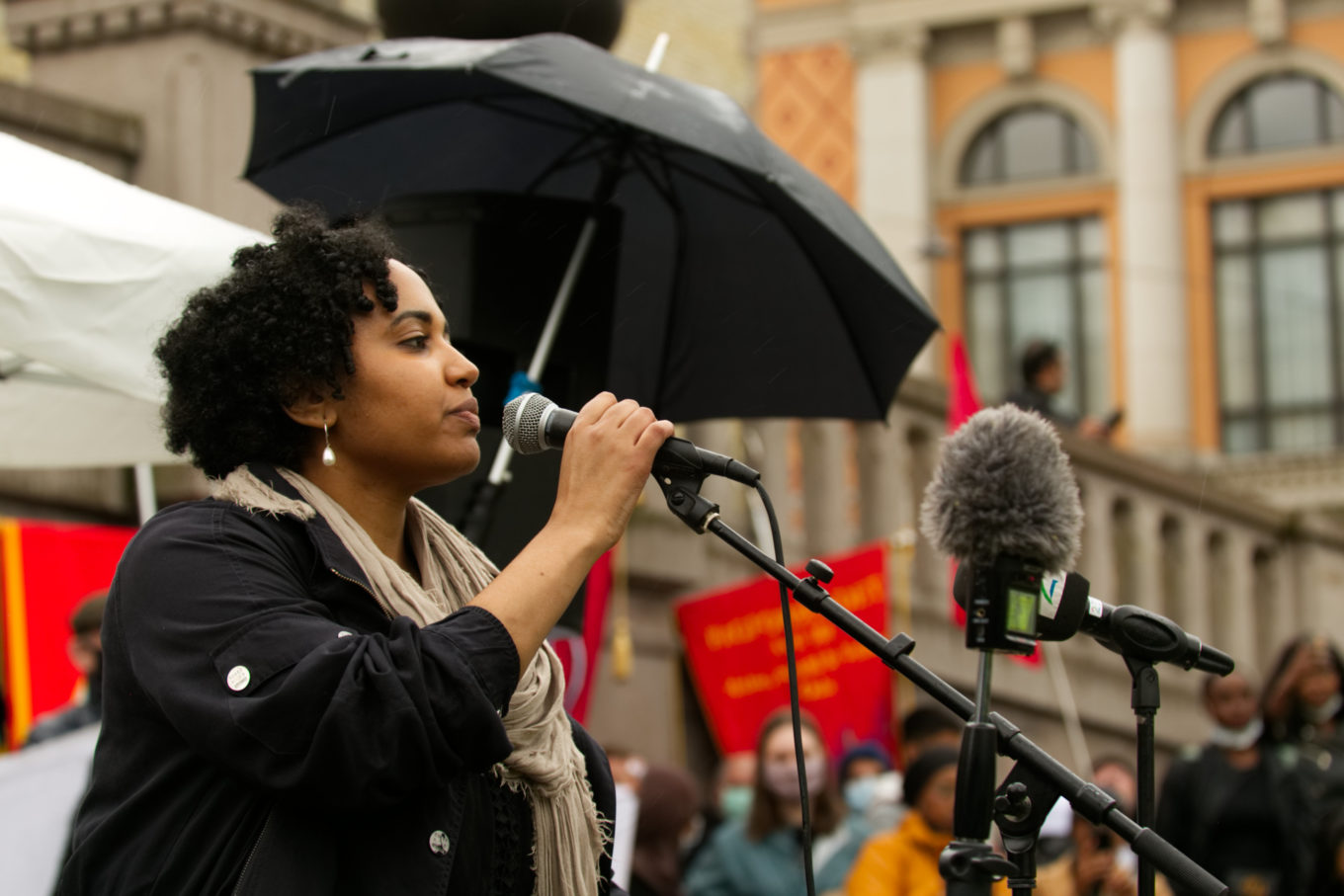 It’s disheartening. After years and years of telling people that racism is a problem in Norway, we were finally able to get people to listen to us as we owned our story.

The story of what it means to be a person of color in Norway. Thousands gathered in solidarity on Friday against racism in front of Stortinget (Norwegian Parliament). The speakers talked about the institutional racism here, the racial profiling by police and the abuse to people just because of the color of their skin.

And when it was over, many people missed the point. It seemed that all the media could talk about was coronavirus. It’s disheartening.

As one of the organisers I got a lot of questions from reporters, even dumb ones like: Didn’t you think about the Coronavirus?

Yes. Of course we did. We worked hard to have a safe and peaceful demonstration because we did not want the message of anti-racism to get lost, as it often does. Many times when there’s an issue about race, it’s white people talking on our behalf, but we also need to use our voices and show what’s happening to us.

Since most of the media and politicians missed the point of the demonstration, this is me – taking responsibility for my story. Let me tell you all about it.

Before the coronavirus, a committee of ARISE and the University of Oslo’s African Student Association were already working on setting up an antiracism campaign in the fall. Then we saw what happened to George Floyd. It was traumatizing to see how he died and one of our team members said we should do something about this.

We decided at the end of week 22 to have a demonstration. We were immediately worried about COVID-19 and the government’s restrictions on gathering more than 50 people. We were worried about being too big of a group that we didn’t want there to be a backlash on our community.

We of course didn’t want anyone to be infected, and we wanted people to stay safe regardless. We didn’t want the pandemic getting bigger. So we talked about how we were going to mitigate the situation.

We were a small group of about 10 people, but none of us were health experts.

First, we contacted the police on June 2nd to tell them what we wanted to do and asked for their advice. They got back to us the same day and really have been helpful. They advised us really well on how to mitigate security issues and keep the demonstration peaceful.

But the Kommune (Oslo Municipality) was a pain on our backs. I called for the Kommune’s chief doctor (kommuneoverlege) and a woman said he wasn’t available so I had to call back the next day. I called him again the next day telling him our plan and to ask his advice on how to manage such a huge crowd during a pandemic. He told me to send an email. I did, he responded with the pandemic-related rules that we already knew. That email was forwarded to another person and another person and yet, another person. None of them gave us any advice, but talked about the regulations calling for no more than 50 people at a gathering. In the end the Smittevernoverlege (Chief of Infection Control in the municipality), sent it to the Ministry of Health, and they sent it to the Health and Care Services (Helse og Omsorg departementet).  I have yet to get an answer from the Health and Care Services.

We tried to work with the health experts on the best way to provide a safe march and our request seemed to get caught up in bureaucracy, and they misunderstood what we wanted. That also was disheartening.

We decided to adapt to the situation and planned a human chain where people could stand 1-2  meters apart. Then have a gathering of 50 people in front of the US Embassy and in front of Stortinget. We coordinated a chain of 750 people across the city centre, which was a lot of hard work.

We tried our absolute best to have a safe demonstration. We bought boxes and boxes of face masks that we handed out at the march. We had people carrying around big bottles of hand sanitizer, and we kept reminding people of the coronavirus safeguards. There were also live-streaming options for those that wanted to participate online.

When we sent out the invitation online, we were surprised at how quickly and huge the response was. In just a couple of days, 13,000 people said they were coming. We were surprised that so many people cared. We are still seeing that outpouring of support and love on social media and we are grateful, but this must lead to a real change.

To those who missed the point of the demonstration, here are some of the lessons we need you to take away.

Recognize that institutional racism is a big problem in Norway that comes in many forms:

The racial profiling that is prevalent under the police’s Stop and Control Policy. Detaining young black men without cause or unlawfully detaining black teens by not contacting their parents.  Often the person of color is assumed to be the one who started a fight instead of listening to eye-witnesses.

The discriminatory behavior when it comes to finding a job. Studies show that it is 25% less likely to get a job interview in Norway with a foreign-sounding name despite having the same qualifications as your white Norwegian counterpart.

The lack of diversity in the education system from kindergarten all the way to the university.

Many teachers in our kindergartens make brown and black children feel like outsiders, and fail to listen to their parents’ concerns. The people responsible for shaping the minds of the future seem to not understand the importance of children who look like them in books or other school materials. Also when kids are called “negger” (nigger) or “Jævla utlending,” (bloody foreigner) teachers fail to use it as a way to have a larger conversation about race and diversity.

In our elementary, secondary and university curriculums, there is a lack of people of color. Students aren’t learning much about cultures outside of Europe or the Western world. There’s a lot of great contributions from people outside of those groups that are just not being taught. This hole in what students learn contributes to ignorance and reproduces the same system that has been marginalising people of colour for generations.

It’s also important to know the full truth of Norway’s history. How we are all living in Sami land, the first slave ship was built by Norwegians, that Norwegians made the colonization of Congo possible…The list is long, but denying this history, along with daily microaggressions and invalidating people’s present-day experiences only compounds the problem. Maybe if our academics took on the responsibility of narrating the truth instead of creating a comfortable narrative, we would all be better off.

The biggest lesson from the march is that it’s no longer enough to say “I’m not a racist.” We need you to be actively against racism, and anti-racist.

Demonstrating for one day is easy, staying consistent in demanding justice for all is commitment. Keep listening, keep learning and be kind to one another.

Rahwa Yohaness is a board member and former president from the University of Oslo’s African Student Association. She is one of the organisers behind the We Can’t Breathe protest in Oslo, and hosted a series of seminars on the decolonisation of academia. Originally from Ethiopia, Rahwa migrated to Norway at the age of 17 and studies International Relations. She has a passion to work with women and youth, with special focus on empowerment and community building.