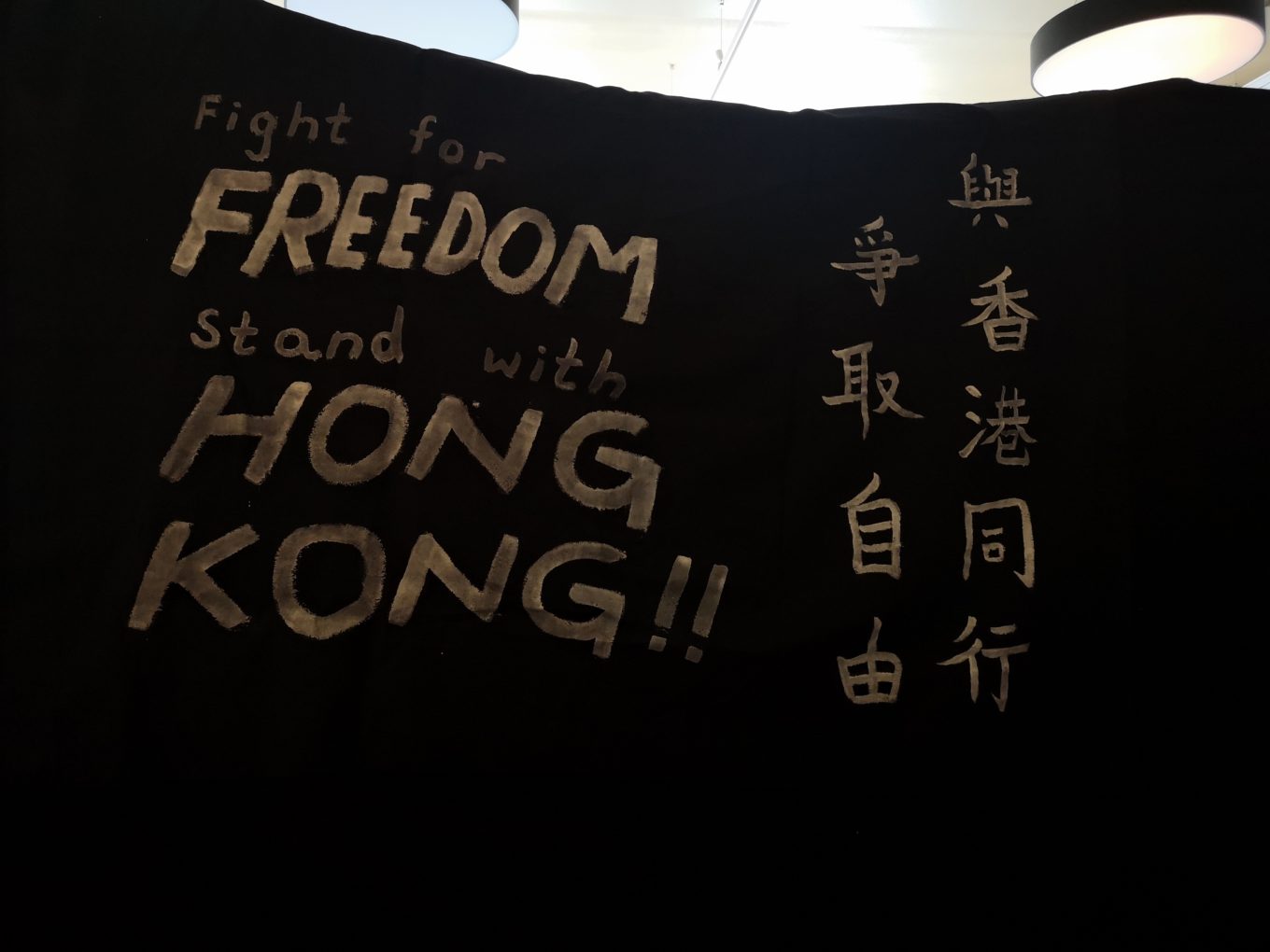 OSLO – On the warm afternoon of Saturday 12th June, I attended an event organised by Hong Kong Committee in Norway at Litteraturhuset. Their programme called, ‘Hong Kong Protest Movement: Preserving the Truth’ unfolded layers of perspectives through the lens of eyewitnesses and reporters from the beginning – how the Hong Kong protest started – to where it has come to now.

Due to covid restrictions, only 20 participants were allowed in the room and mingling was not allowed.

Masks were required when entering and exiting the room. Behind the main seating area was a display of photographic and poetry books along a table, as well as large posters hanging on the walls. Merchandises from the committee can be bought via Vipps. Only 4 persons were allowed to enter this cordoned area.

The theme of the programme was to raise awareness of the movement and the importance of these documentaries as they were being censored in Hong Kong and China. The opening by Deputy Leader of Hong Kong Committee in Norway, Arne Melsom, on the timeline history of the movement also included disturbing footage of defenceless protestors being kicked by police, and showed statistics of declining public trust in the police before and after the protests.

The first screening of Oscar-nominated documentary ‘Do Not Split’, directed by award-winning Norwegian documentarist and journalist Anders Hammer, captured “the determination and sacrifices of the protesters, the government’s backlash, and the passage of the new Beijing-backed national security law” in Hong Kong.

The film opens with a group of black-clothed youngsters setting a Bank of China branch on fire, and then you witness a succession of events where a boy was caught up inside of a shopping mall and arrested by the police, and then another passer-by on the streets was knocked over by police officers as they chased after escaping protestors. Many of the scenes were taken in closed-up frames, making one feel closer to the subjects. There is an impression that the police officers were arresting indiscriminately. I felt the despair of the youngsters describing their future.

After the screening, Hammer spoke of the Beijing government’s attempt to ban Oscar from broadcasting in China, and many of the public screenings of the documentary had been cancelled during the year. “From what I understand, it has been difficult to get proper explanations. With the new amendments that came yesterday, I think it would be impossible to screen any protest-related movies in Hong Kong. I read the whole thing.”

The new amendment to the Film Censorship Ordinance now includes censoring films that are deemed to endanger national security. Hammer anticipated that fictional films will also be affected as well under such laws.

As a foreign reporter, Hammer recognised his own privileges in covering the Hong Kong movement; local reporters were being attacked more often. He was able to stand close to the police officers in the beginning but later on, he had felt their hostility. Though many other reporters were also having challenges getting interviews with the police. Hammer described also how he witnessed younger police officers being held back by their superiors when they got too aggressive.

“In a way, our documentary has become part of the story told in our movie, which is how the room for expression and the freedom of the press and other basic democratic rights are disappearing in Hong Kong,” said Hammer to Reuter.

Eyewitnesses on the Ground

A panel discussion between eyewitness accounts and a protest organiser followed. A Norwegian student studying in Hong Kong at the time of the protests witnessed the unequal power between the police force and the protestors. He described moments of laughter in the midst of the chaos, the moments of care from protestors, and also an incident where he suspected undercover police officers were impersonating protestors.

You can listen to the whole discussion here:

Eyewitness accounts were one of the most important aspects of the programme that gave a fuller picture of what is actually happening on the ground in Hong Kong, when we are far away.

Another major turn of events during the movement was the Yuen Long attack on the 21st July 2019. A group of men wearing white t-shirts descended into the train station with iron bars and wooden clubs, attacking civilians indiscriminately. The men with white t-shirts were thought to be affiliated with triad gangs.

The award-winning documentary, ‘Hong Kong Connection: 7.21 Who owns the truth’, produced by RTHK reviewed CCTV and online footage of the 2019 Yuen Long attack. The clues in the footage led them to find who were the men wearing white t-shirts on that day. When it was announced that the documentary would receive the 2021 Human Rights Press awards, Paul Lee Yin-chit who lead the documentary team resigned. Freelancer Choy Yuk Ling was arrested for illegally obtaining car license plate records.

It was hard not to conclude that press freedom is not being attacked, given all of the evidence, eyewitness accounts, and new restrictive policies.

Speaking truth to power is never an easy path. The backlash received from these reporters capturing these events through photography and video shows the power of documentary. Each of these documentaries complemented and reinforced the other; adding a new layer to our understanding of the situation.

Jessica Chui, Leader and Chairperson of Hong Kong Committee in Norway said that RTHK rejected their application to screen their documentary on the basis that NGOs are not allowed to conduct public screening.

“Considering what is going on in RTHK lately, for example, the reorganisation and taking down of videos on YouTube, I consider that they do not want the public to screen their documentaries. It’s censorship,” Chiu remarked.

Behind Scenes of the 2019 Siege at Polytechnic University

In the award-winning documentary, ‘Save PolyU’, showed exclusive footage inside the campus during the 2-week siege of Hong Kong’s Polytechnic University in November 2019. The film showed scenes of a mother who hired a lawyer to find her daughter trapped inside the campus, and students abseiling down ropes to escape. Some were seen falling half way down the ropes, and then limping towards motorcyclists to drive them away. You also hear a police officer using a loud-speaker to scowl the students.

It was the first time that Chiu watched ‘Save PolyU’. She said she was “shocked” and unable to describe her feelings. “It is time for us to remind ourselves, what was the cause and how it became like this.”

The event programme ended with the DW Documentary “Escape from Hong Kong – A New Life in British Exile”, which follows four activists – Nathan Law, Finn Lau, Simon Cheng and Jim Wong – and their lives in exile in the UK. Here we see the effects of the national security law.

“I hope the audience get to have this feeling that they got the first-hand information that they would like to know about [Hong Kong protest],” said Chiu.

As a journalist, born in the UK and with roots extending back to Hong Kong. The 4-hours discovery of what is truly happening in Hong Kong through watching the series of documentaries left me overwhelmed.

When I got home, I jumped onto a call with my father residing in the UK and told him where I had been that day. Heated discussions ensued as we threw examples at each other of brutalities from the police force and protestors. I sometimes wonder if my father could identify credible news sources from fake news. He also questioned the journalist, Veby Mega Indah, whose eye was injured during the chaos. After some research, I could not find any reports regarding her false allegations. At the end of our conversation, we both concluded that people from both sides will always get hurt. Unfortunately, this also includes civilians who do not want to participate in the political struggles.

Fearing repercussions, my father has always urged me to not write about Hong Kong protests. Even now, writing about my thoughts regarding this event programme, I couldn’t shake off the unease of what will happen to me when I enter Hong Kong again. If they found this piece, would they label me as a traitor?  Holding a UK passport doesn’t protect me from potential arrest and interrogation, even though I am only doing my job – seeking the truth and understanding its layers.