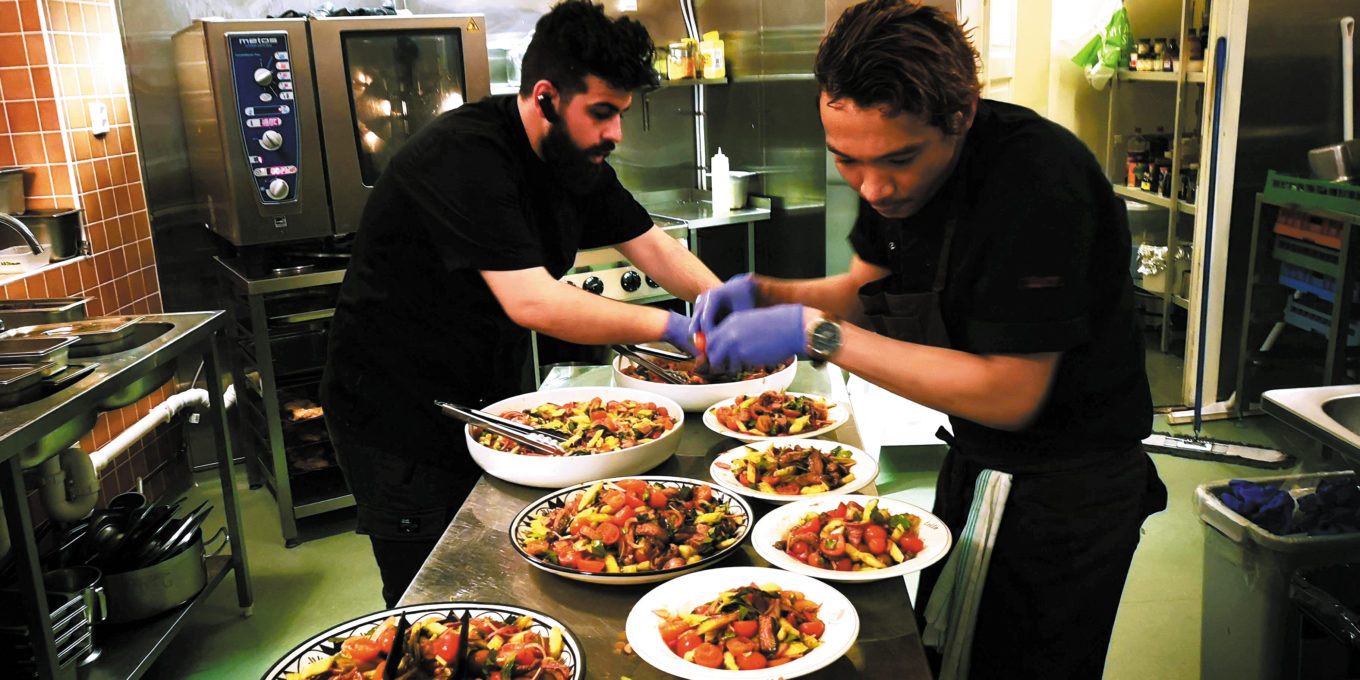 The Intercultural Museum of Oslo is an imposing building that would not stand out of place in the salubrious streets leading to the Royal Palace but, perhaps surprisingly, lies in Gronland, arguably Oslo’s most diverse district. Tempted by the offer of a hot Asian meal, I braved the freezing cold to attend a talk delivered by Professor Bryan William Van Norden, praying that I would not leave disappointed; and I didn’t.

I was invited to attend the sixth edition of ‘Mat og Viten’ on 25th February on the theme of “Learning from Chinese Philosophy”. Mat og Viten is a monthly event curated by co-organizers Anders Bettum and Christine Pramm of the initiative’s namesake, and Dag Herbjørnsrud from SGOKI (Center for Global and Comparative History Ideas).

These events are designed to investigate topics such as intolerances in society; often in partnership with distinguished guest speakers such as Bryan William Van Norden. Bryan is the ‘James Monroe Taylor Chair’ in Philosophy, at Vassar College, US and is currently the Kwan Im Thong Hood Cho Temple Professor in the Humanities, at Yale NUS College, Singapore.

Given the Chinese theme, I had expected to be served Chinese food but was in for a surprise. As the aroma of delicious food floated around; an estimate of around 40 people tucked into vegan spring rolls and homemade sweet chili sauce served in Vietnamese style. Delicious, albeit cold; but nothing warms a person and his opinions more than a hearty meal! So, I grabbed this chance to sit with Bryan, who shared some insights into his life.

Bryan William Van Norden comes from a small town in Pennsylvania, USA which is “99% White and 99% Christian”, and now is happily based in the bustling metropolis of Singapore; a journey that was encouraged by having an understanding of, and being welcomed into different cultures. He acknowledges the importance of events such as “Mat og Viten” given the known fact that “We live in an increasingly small world, and it’s impossible for cultures to isolate themselves, so it’s more important than ever for us to learn about other cultures”.

The Need to Listen More

Dag echoed Bryan’s view by sharing, “I hope that the virus crisis can teach us that we need to listen more to and learn more from other people around the world. I think they can take away [from the event] with them the fact that there are so many perspectives all over the world, we don’t get to know about in the traditional canons. The history and knowledge systems in Africa, Asia, and Indigenous America are so vast – and in general, we don’t get to know about this in the reading lists of the European schools and universities. Also, the European history is more complex than we are thought to believe – for example, reflecting and understanding the contributions of the Sami people here in Northern Europe.”

A Global Perspective and Mozi’s Approach are Relatable

Dag further discerned- “I think it is prudent with a global perspective – as the coronavirus (COVID-19) has demonstrated. The medical staff and politicians of Taiwan, Singapore, Hong Kong, South Korea, and China can now help the European countries in order to cope with the virus. China has sent tons of medical equipment to Italy and Spain, and they have sent their experts and doctors in order to give advice. We all depend on each other, as the virus demonstrates. A eurocentric (Europe-centered), or Sinocentric (China-centered) worldview will not help anyone now. This scenario has amplified the need for listening and taking each-others’ opinions resolutely. If the European politicians had listened more to the warnings from East Asia in January, could they have saved more lives then? This crisis has made me think more about the classical Chinese philosopher Mozi (c. 4th century BCE), who argued that we need to base our thinking and actions on “impartial concern” (jian’ai) – or “universal love”, global solidarity. Such thinking as that of Mozi is what we need now, not more selfish nationalism and ethnocentricism.”

“Nothing is not oneself”. Did I hear correctly? Thankfully Bryan gently introduced us to Chinese Philosophy by pairing metaphysical prose with examples such as how one might feel compassion for a child in pain, because “your mind forms one body with the child”. The Corona pandemic highlights how intertwined we all are irrespective of age, gender, ethnicity or location. Bryan supported this with the knowledge that Chinese Philosophy is “intrinsically opposed to the politics of division and of hatred”.  The audience was treated to a vision of interconnected lines, which Bryan zoomed into, resulting in further interconnected lines.

Christine Pramm runs Inshalla catering and has been running in and out of the kitchen. She reflected on how this photo displayed how linked up we are to one another. “For me, these kinds of evenings makes it all fall together; had it not been for the project MAT+VITEN; the collaboration between us and the museum, our staff, the guest chef, the guest speaker, the guests, our farmer who came with the lovely greens and our chicken farm with organic chicken and so forth – all the small parts put together making this special evening happening – it would not happen if not it all were there.” She recalled what Bryan said, “Everything exists only as part of the whole, but if there were no parts, there could be no whole. Just like this evening – and everything in life is like this.”

Food has long been used to unite cultures and tonight was no exception. Vietnamese starters were followed by Thai jungle curry with rice, stir fry bok choi, and beef salad. Chef Gean Non is from the Philippines. When asked why we were not eating Chinese dishes, Gean replied, “The basic Thai food came from China”. I smiled as Gin echoed my gut feeling that many Southeast Asian dishes share a cultural connection with this land.

Gean gave an insight into his experiences of settling into Norway; initially feeling “like an alien” and “having “inferiority complex” to the present “changed times – when you meet people you understand the culture […] Norwegian people are very nice, you treat them with respect and they’ll treat you back with respect”.

Diversity Socialising over Food and Knowledge

Attendee Omer Ahmar has Turkish roots and studies at Oslo Metropolitan University. He wanted to learn more about East Asian culture after following the news from Hong Kong and the recent BAFTA award-winning film Parasite. “When I first came in, I just felt like I came to a julebord that I wasn’t invited to because it felt a little formal in the beginning, and it was my first time here so I felt a bit insecure; then I thought- it was very social to eat food at the same table and listen to a lecture.”

Omer also shared his views on how such cultural events can be a potential to address diversity and inclusion, “I just want to experience the diversity, I see in the streets of Grønland and also at cultural events and different occasions. We bring our backgrounds and experiences and that enriched the whole experience”, – a viewpoint echoed by others at the event.

It is estimated that immigrants and Norwegian born to immigrant parents make up 18.2% of the population according to Statistics Norway as of January 2020. The potential to push diversity at cultural events is key.

Upon reflection, Omer shared, “My experience has been a little bit different than Norwegians, probably because in Turkish culture, we believe in interknit roots; which is stark in contrast with people here who are saying things like- we believe that we are completely separate from one another. So this Chinese philosophy held a close similarity to what I had grown up with.”

They come here happy and they go home happy

Anders Bettum, a Senior Curator and Research co-ordinator at the Intercultural Museum of Oslo is from Norway. He hopes to create research from both the ‘Mat og Viten series’ and from his interviews with students aged between 13-20+ group on the topic of prejudices. Anders is keen to understand where prejudices come from, given his observation that “culturally immigration enriches us”. Mat og Viten events are “a way of trying to go behind some of all the prejudices that are controlling us”.

As I stepped back out into the streets of Grønland, I recalled the chef looking at the guests and wishing that “they come here happy, they go home happy”. I certainly did.

V Ayer is a Risk Management Consultant and was born in the UK, to parents from the Indian subcontinent. He lives in Oslo, Norway.