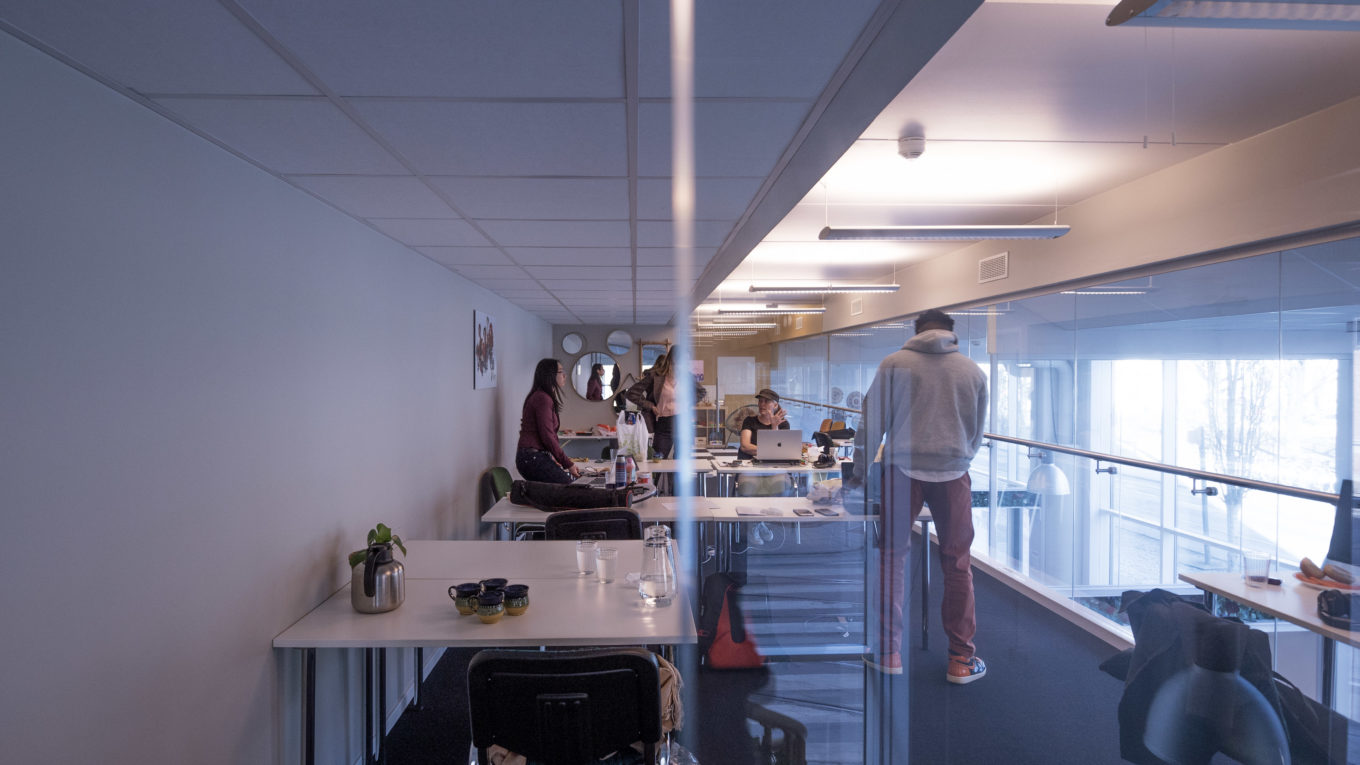 Behind set of the conference. Photo: André Percy Katombe.

On Wednesday 24th March, the inaugural conference on Shifting Power and Diverse Narratives in Journalism organised by The Oslo Desk was built on the theme of diversity, equity and inclusion in the newsroom and then examined ‘Language, Narrative and Power in Mass Media’ with a sparkling array of speakers.

The opening key speaker was Rahwa Yohannes, an International Relations Masters student at Oslo University, an activist and one of the main figures behind the We Can’t Breathe protest in Oslo in July 2020 in response to George Floyd’s murder in the USA last year. Due to her role in last summer’s protests, she has predictably come under fire within some corners of the media and been accused in her own words of “importing problems from America” as well as “worsening the corona situation”. As she noted wryly, it was often her critics who imported issues, for example by conflating the statue debate raging in the US and UK with the BLM protests in Norway. Many of those same critics questioned whether racism even existed in Norway!

The approach of the mainstream media has been clear for some time. For example, last year’s security report from the Ministry of justice and the intelligence services pointed to the threat of right-wing extremism being as significant as that of Islamic terrorism in Norway. When the country’s most celebrated newspaper, Aftenposten, summarized the press conference, no mention was made of white, right wing extremism.

This is in keeping with the disproportionate coverage afforded to gruesome acts perpetrated by Islamic terrorists versus ‘lone [white] wolves’. The corruption of ideology of the Charlie Hebdo assailants received much more attention than the Christchurch murderer for example, where column inches was spent describing who he had been and the positive sides of his character before the atrocity.

Rahwa felt many issues of discrimination and racism are avoided in Norway, except in a superficial way. The recent reporting of the coronavirus and its spread around Oslo for example, pointed at immigrant communities. The shallow ‘analysis’ failed to address underlying issues such as overcrowding in housing, relatively low incomes and employment that required people to put themselves on the frontline rather than being able to shield from home offices. Most damningly, Rahwa pointed out that when editorials espoused on racism and its evils, the sources were rarely from marginalized communities.

Yohannes was followed by the social anthropologist, Michelle Tisdel, an American who has made her home in Norway. An archive researcher at the National Library, she has worked nearly 15 years in the heritage sector in Norway.

She presented an intellectual ‘tour de force’ emphasizing the dichotomy of ‘historical versus community’ and the importance of documenting community perspectives. Michelle introduced the concept of, “self-historicizing, which is how individuals participate in historical documentation production. Among many illuminating ideas was the assertion that biographical and autobiographical material contains community experiences.

Tisdel has garnered much attention recently with her own documentation project which she began last July during the George Floyd protests. She started collecting many of the placards of the (peaceful) protesters quickly filling her apartment to bursting! It was vital to Tisdel that these community perspectives, the sentiments expressed, were not lost to posterity. One of the problems she had encountered was that archival institutions in Norway “do not promote or capture the racism documented throughout Norwegian history. Not simply is it not taught [in educational institutions] it is aggressively ignored.”

Behind the scene of the virtual conference set. Photo: Leanna Lunde.

After a short coffee break, the conference resumed with the next keynote speaker, Eliot Moleba. A PhD student in Oslo who hails from South Africa, Eliot spoke eloquently on the narratives of minorities in public spaces.

As a playwright, theatre-maker and director Eliot is highly attuned to symbolism. It was a lightbulb moment among the panel as well as many of the attendees when he pointed out that Norway was striking for the paucity of statues, roads or public monuments, that acknowledged or commemorated people with minority backgrounds. This had negative effects such as the fact that people with minority backgrounds were often spoken about rather than spoken with, by Norwegian media. However, this lack of public recognition didn’t nullify its existence.

The final speaker was another South African, Andy Leve. An award-winning journalist, Andy works in radio, print, television and in the online space. An engaging and lively orator, Andy illuminated the discussion by stressing the importance of storytelling in all its rich shades. A lot of western media succumbs to the dangers of a single storyteller, especially when talking about Africa and other non-white regions of the world. When writing on Africa, she argues that there tends to be a singular thread, treating it as a monolith, despite it consisting of over 50 countries. Such a singular approach robs those who are being written about of a holistic, lived experience.

She spoke to the ‘othering’ that continues in the mainstream, and Norway is no exception. Referencing an anonymous Norwegian publication she had worked for, they tended to push the “dangers, the violence, the drama, the poverty” of the black, African experience. There is a duality in the way Africa is portrayed that is used in order to show what the West is not.

The consequence is to perpetuate stereotypes, simultaneously creating a white saviour and superiority complex. Yet whether it be recent events in the US Capitol buildings, or the Austerity program of the governing Conservative party in the UK, attempted coups, violence, assaults on democracy and poverty are not unique to Africa. While decrying the obvious deficiencies of this approach to storytelling, she places a sense of onus on the reader to seek out a broader range of storytellers.

The Q&A for this section of the conference was an even livelier affair with even more attendee participation, which spoke to the engagement of the attendees and the obvious importance of the event to many people.

Time and again the issue of unconscious biases, which we all carry, came up. The lack of diversity in the journalism space renders this even more problematic for society as those biases affect how journalists report stories. Many reporters fail to comprehend the impact of the language they employ and their narrative framing. One possible solution put forward by Yohaness was anti-bias training, but she also stressed how vital it was to have minority voices further up the food chain in boardrooms.

Dangers of social media and the viral newsclip were addressed and Moleba was quick to analyse how people tend to jump into a topic that they are not well versed in because it is the hot topic of the day. This often leave reporters scrambling for hot takes and consequently approach it in a clumsy way that betrays their ignorance. Andy Leve built on that notion by advising against entering into a debate or situation with a pre-conceived idea of what you want the conclusion to be. This sounds like sage advice, not just for journalists and the news industry but the whole of society.

Read More: Commentary: Why does Diversity, Equity and Inclusion in Journalism Matter? (Part 1)

Disclaimer: The views, thoughts, and opinions expressed in the text belong solely to the author, and not necessarily to the author’s employer, organization, committee or other group or individual.

Michael Adade is a British born expat who has lived in Oslo nearly five years. A trained lawyer, he has worked in finance, communications and also ran his own business. Since moving to Oslo he has chronicled his own immigrant experience, one that his own parents went through 45 years ago. The parallels have fascinated him and led to him increasing his own political activism as well as writing.