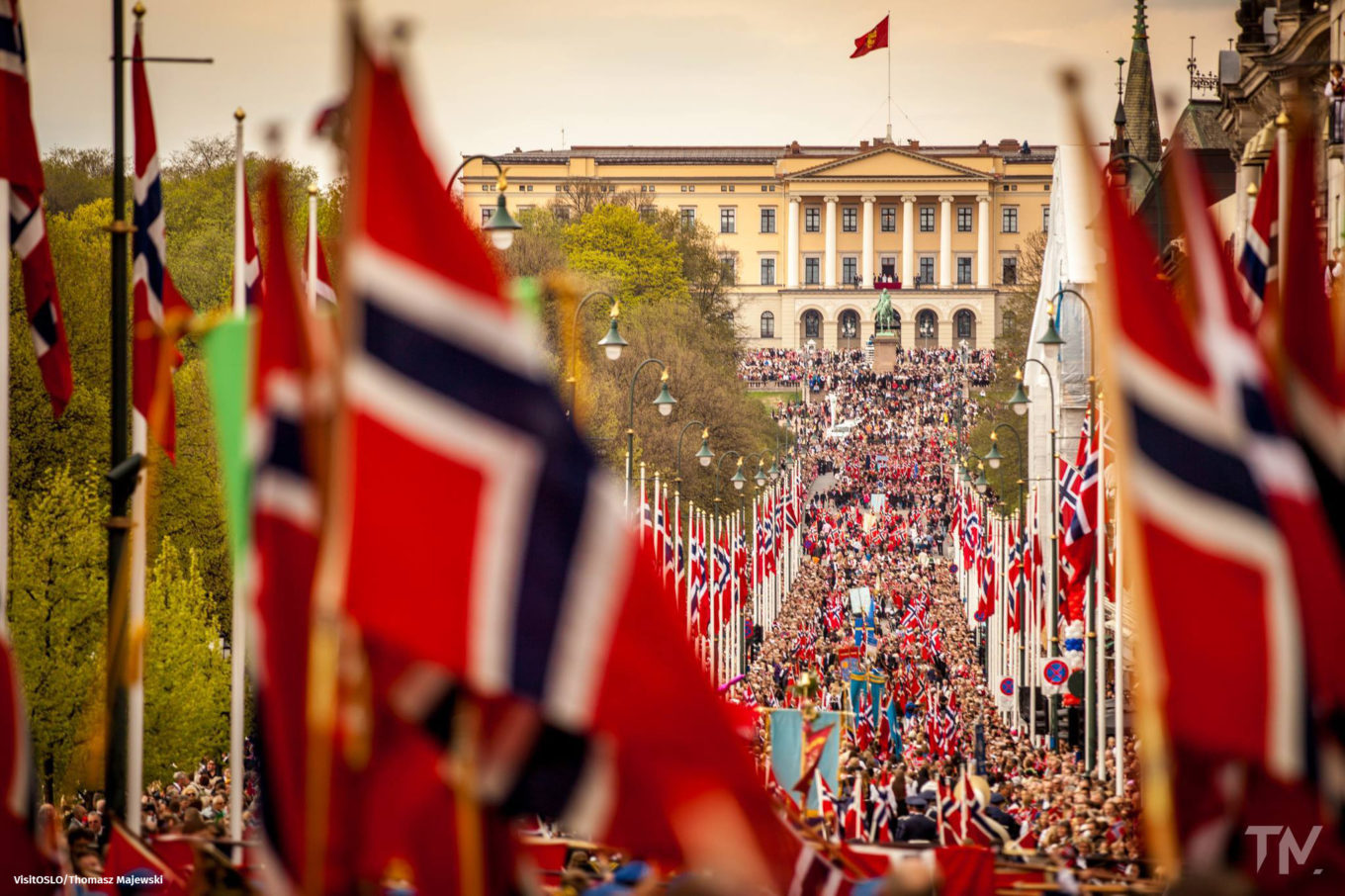 A few years ago when I had just moved to Oslo, I went out on a Saturday to grab a coffee with my then-boyfriend. The place we went to was packed, not a single table was available. In the corner sat a young couple and when they saw that we couldn’t find a place to sit, they offered us the two free seats at their table. We said thank you, sat down and drank our coffee. After a while, the couple started talking to us. They asked us where we were from and what we were doing here, the usual questions. They told us that they were an international couple themselves, with her being from the UK and him being Norwegian. When I mentioned that I was German, the guy turned to me and said, ”great, German. You know you guys invaded us back in 1940?” I don’t even remember my reaction. This situation stuck with me not because it made me uncomfortable.

You guys and us
This topic doesn’t make me uncomfortable anymore, I have been asked so many questions and heard so many jokes about it that I feel almost immune to being offended by it. What stuck with me was that he said, «you guys» and «us». I mean 1940. I was certainly not born then, and I am pretty sure he wasn’t either. Maybe I reacted more strongly to it since I am German and I don’t want to be identified with the people that committed any of these atrocities back in 1940. So, when someone “you invaded us back in 1940”, it hits a nerve. Why did this man relate so personally to these historical events in Norway? My first 17th of May was in 2016, and I went full in. I had some friends (both Norwegian and international) over for breakfast, we had salmon, kransekake, brunost and akevitt, and then we went out and stood in front of the Royal Palace to watch the procession. Throughout the day I witnessed masses of people carrying flags and lots of anthem-singing, and whilst I found it somewhat strange, it certainly was an interesting experience.

Immigrant flags on May 17
However, later on I found a discussion in the comments under a newspaper article on Facebook (the ones with which you cannot help engaging, despite knowing that you really shouldn’t) in which a group of Norwegians was discussing whether it was better for immigrants and foreigners to wave a Norwegian flag or their own national flag on 17th of May. The opinions were mixed, but the undertone was quite consistent: it was either frowned upon that an immigrant would wave a Norwegian flag, or it was considered outrageous to use any other than the Norwegian flag on that day («Til alle dere som vil gå med et annet flagg enn det norske på 17. Mai: Pleier dere å gå i bursdagen til Kristian og gratulere Arne med dagen?»).

Integration question
What it means to successfully integrate immigrants is probably the most challenging question in regard to immigration in any country since it means that people from different religions and cultures have to share a space. Norway is a small country and it has had quite the history. After having been the underdog of both Denmark and Sweden for many centuries, it only became independent in 1905. It used to be a religious country that made its living primarily from fishing and farming until it started to explore its vast oil reserves in the late 1960s, making it wealthy overnight. The population density today is 13.2 people per square km, and the population is mainly cumulated in the few urban areas of the country.(1)

As a comparison, the population density of Denmark is 133.53 people per square km, and that of Germany 230.44.(2) The first wave of labour migration to Norway came in the 1960s as a result of the oil boom, with mostly men from Turkey and Pakistan coming to work in the oil sector. After the oil crisis in 1973, the next wave consisted mostly of family members of previous immigrants, and after 1985 the number of asylum seekers began to rise.(3)

The Norwegian Fremskrittspartiet (Progress Party) saw this as a problem and began to take an increasingly hard line against immigration. In the run-up to the parliamentary election in 1987, party leader Carl I. Hagen received the so-called Mustafa-letter, in which a group of Muslims supposedly announced that they wanted to turn Norway into a Muslim state. Hagen used this letter in the election campaign, reading aloud from it at a public event. The letter turned out to be false, but it helped the party to win 12% in parliament (4). Immigration then became one of the key issues for the party after 1987.

Imagined community
The political scientist Benedict Anderson describes any nation as an imagined community: “[It] is imagined because the members of even the smallest nation will never know most of their fellow-members, meet them, or even hear of them, yet in the minds of each lives the image of their communion.”(5) This communion can create a strong bond between members of a nation.

In Norway’s case, the imagined community is a rather young one: Only after the country gained independence from Denmark and Sweden was it able to create its own identity, despite several prior attempts to build this imagined community, especially in order to oppose Danish and Swedish occupation: The linguist Ivar Aasen, for example, constructed the dialect-based written standard Nynorsk by travelling around the country and collecting dialects in 1840.

While Anderson explores the mechanisms that create a national community, historically and geographically, the Jewish sociologist Norbert Elias takes this a step further and looks at how an established group almost inevitably sees outside influences as a possible threat to their community (6). This becomes especially relevant in a society that has been built on equality and sameness: The concept of Janteloven (created by the Danish-Norwegian author Aksel Sandemose in his book A Fugitive Crosses His Tracks, 1933) describes a pattern of group behavior that negatively depicts any individual success and achievement. It portrays Norwegian society as a homogeneous group in which any claims to special treatment and elitism are frowned upon (7).

In both countries, this has in turn led to a rise of right-wing populist groups claiming to protect Western values against religious and cultural influences. Norway’s national identity is still quite vulnerable and fragile after centuries of occupation, and the country went from a poor fishing- and farming community to one of the world’s richest countries within just a few years. Could this relative youth and new-gained freedom be a significant factor in the strong focus on ‘Norwegian values’ we see today, this almost nostalgic view of anything that makes people feel part of this imagined community?

Typical Norwegian
I get the impression that many people I meet embrace anything that makes them a typical Norwegian. In Germany, I am used to people telling me how they don’t want to be too German and how they are doing things differently from everyone else. Here, quite the opposite: I see many Osloites happily going to their hytte every weekend, putting on skis for almost 6 months a year and reading crime novels over Easter. And it seems to be the norm to settle down early: In 2014, the group of millennials (those born between 1980 and 2000) made up 98.7% of first homebuyers in Norway.(8) My personal impression is that many people here seem to do things by the book.

However, I too see that it is easy to settle here because it is not necessary to have a career and earn a lot of money before you can settle down or have a family. And that is a good thing. But I wonder if the instinct to do things by the book and to be like everyone else prevents people from being able to criticize the state? What about the rising social inequalities or the environmental damage caused by the oil and gas industry and the investments of the Pension Fund? Are political parties such as the Progress Party exploiting these sentiments of national identity to depict immigrants as a threat to the country and to promote stricter immigration laws and closed borders?

I have learned the language, I work in a Norwegian school with Norwegian colleagues and Norwegian kids and I have Norwegian friends. I still notice differences, and I am still curious. I have lived in several countries, and each one has shaped me in a certain way. So has the Norwegian mentality. It has shown me that it is ok to feel part of a community and that I, too, have to make an effort to integrate if I want to live here. But I also know that I am going to keep asking questions, and that I want to encourage people to do the same. In the meantime, I’ll keep eating brunost and drinking akevitt and watching how Wenche prepares the perfect fiskeboller i karrisaus.

[6]Elias, Norbert, and John L. Scotson (1965). The established and the outsiders; a sociological enquiry into community problems. London: F. Cass.